Thousands turn out as Big Boy locomotive rolls into Ogden

That was the word of the day behind the Union Station in Ogden after Big Boy No. 4014 rumbled into town Thursday to meet up with the Living Legend No. 844 and dignitaries tapped a golden spike replica to re-enact the 150th anniversary of the wedding of the rails 40 miles away.

The Heritage Festival drew thousands of people who cheered on the locomotives amid the celebratory fanfare that included railroad videos, a song about Big Boy and the deafening whistles of the historic locomotives.

“Some of you have traveled literally across the globe to be here,” said Scott Moore, Union Pacific’s executive vice president of corporate relations.

He gave a shout out to the city of Ogden for putting on the event.

“Or should I call this Steamtown USA?”

A particularly touching moment of the ceremony facilitated by Utah Gov. Gary Herbert’s office was the introduction of the David Edward Gillies family.

Gillies was a train engineer in the United Kingdom whose final wishes were to be “consumed by the belly” of No. 4014, who he had dreamed of seeing all of his life.

Gillies succumbed to cancer last year, so Union Pacific President and Chief Executive Officer Lance Fritz held up a small urn and said that the man’s wish would be granted.

Family members in the crowd, including Sally Gillies, the daughter who met with Herbert to facilitate the ceremony, stood and were introduced.

Fritz noted that the idea of a transcontinental railroad came from Abraham Lincoln, inspired by a broken country crumbling under the Civil War.

“Lincoln signed into existence the legislation to create the Union Pacific Railroad in 1862 during the darkest moments in history as a visionary to stitch this country together.” Fritz lauded those thousands of workers who labored under “brutal and punishing conditions. “

Under its own steam, ‘Big Boy’ heading for Utah celebration

When Utah celebrates the upcoming 150th anniversary of the completion of the transcontinental railroad, a star visitor will be something called “Big Boy.”

The wedding of the rails, he noted, changed the country forever.

Herbert noted the long productive relationship Utah’s had with the railroad, specifically Union Pacific, and stressed how much the historic event shaped the state.

“Ogden became one of the great railroad cities of America. We became the crossroads of the West because of the joining of the transcontinental railroad at Promontory (Summit)."

Herbert said that joining of the railroad is a testimony to the fortitude of the country, demonstrating that even today it has lessons to teach America if people are willing to work together.

Earlier, Iowa residents James and Virginia Hayes had their eyes fixated on the pending arrival of Big Boy.

They drove to Utah, leaving Tuesday and arriving in Ogden Wednesday night.

The idea to watch Thursday’s event and travel Friday to Promontory Summit for the festivities there was suggested by James Hayes, a 42-year railroader for the Burlington, Northern Santa Fe Railroad.

Virginia Hayes took a few days off from her teaching job to make the trek.

“This is really amazing,” she said. “There are people from all over the world who are here.” 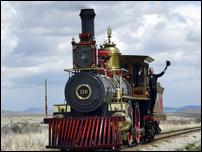 Union Pacific’s Big Boy No. 4014 and the Living Legend No. 844 roared into Utah Wednesday morning to the delight of train enthusiasts who came out to watch the train's journey.

Terry Guthrie, who works for Ogden city, was among the employees who checked in at 4 a.m. Thursday as volunteers to help with the crowds.

“They closed down most of the offices so we could come out and help.”

Tom Savio, a writer for the Passenger Train Journal, was dressed up in overalls and decked out with Union Pacific memorabilia.

He sported a name tag that said “Uncle Pete,” which he said is a printable nickname for the Union Pacific Railroad.

All railroads, he added, have nicknames earned over time, but many of them are often saucy.

Savio said he was at the celebration 50 years ago, and this year’s was far, far better.

“I think it is because (Fritz) likes to do things nicely.”

The writer said he had first ridden on a train when he was just age 4.

Amy Joi O'Donoghue
Amy Joi O’Donoghue is a reporter for the Utah InDepth team at the Deseret News with decades of expertise in land and environmental issues.