"It's a transparency issue," the sponsor of SB151, Sen. Deidre Henderson, R-Spanish Fork, told members of the Senate Government Operations and Political Subdivisions Committee before their vote to recommend passage of the bill.

It will be considered next by the full Senate.

Besides mandating that the price tag be placed at the top of an initiative petition, it also requires that at least 50 copies of the fiscal impact statement be made available at the public hearings that must be held before it can be circulated.

Henderson said the changes made by the bill, which also include having the legislative fiscal analyst provide financial information instead of the governor's budget office, should not be seen as an additional burden.

The new requirements are similar to those imposed by the Legislature in the past on local bond issues on ballots, she said, noting voters still approve such measures even after details of the costs were stated up front.

Sen. Kathleen Riebe, D-Cottonwood Heights, said she was concerned that Utahns already had to work "very, very hard" to get three initiatives on last November's ballot and questioned whether SB151 would make that more difficult.

"It doesn't really provide any extra steps," Henderson said. "It's just a matter of making sure the public who's voting on this understand the implications, how much it's going to cost and where that funding is going to come from." 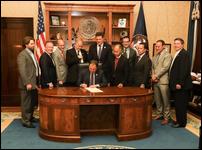 Sen. Todd Weiler, R-Woods Cross, brought up the differences between Question 1 in the last election, asking voters if they wanted lawmakers to raise gas taxes to help fund schools, and Proposition 3, which increased sales taxes for Medicaid expansion.

"After the election was over, almost everyone I talked to about the propositions knew that the ballot question, the nonbinding gas tax ballot question was a tax increase" that was voted down, he said.

But Weiler said the voters he spoke with weren't aware there was an even bigger tax increase, a 0.15 percent hike in the state sales tax, in Proposition 3, believing instead the federal government was picking up all of the expense.

"Most people were surprised, and I'm not sure how that got lost in the conversation," the senator said. "I really welcome these changes. I like the initiative process in general."

Testifying in favor of the bill was Phill Wright, a Utah Republican Party official who continues to battle legislation passed in 2014 as a compromise with backers of the Count My Vote ballot initiative that sought to establish direct primary elections.

"We have ballot initiatives that are either deceptive or they don't let the public know the fiscal impact it's going to have to the state. It makes your job a lot harder and then you become the bad guys," Wright said, citing SB96 as an example.

He said the bill passed Monday as a replacement for the full Medicaid expansion in Proposition 3 is what happens when lawmakers have to "figure out a way to pay for something that the public thinks they wanted and thought was being funded."