SALT LAKE CITY — A Utah militia leader who tried to blow up a remote Bureau of Land Management cabin won't have to spend more time behind bars after a federal judge released him Monday.

U.S. District Judge David Sam gave William Keebler, of Stockton, credit for the 25 months he has served in jail since his arrest and sentenced him to three years of probation in a brief hearing.

Sam factored Keebler's poor health, apology, lack of criminal history and military and community service into the sentence, but said his "loose words and conduct" about war and government overreach made him an appropriate target for the undercover FBI investigation that led to his arrest.

Keebler, 59, admitted in April to attempted destruction of federal property by use of an explosive in an agreement with the U.S. Attorney's Office. Keebler, who formed a group called the Patriots Defense Force, tried to blow up a BLM cabin near Mount Trumbull, Arizona, with an inert pipe bomb in June 2016.

Prosecutors argued in court documents that Keebler should be sentenced to the high end of an agreed upon 12- to 70-month prison term to promote respect for the law, deter future criminal conduct and punish him.

But Utah U.S. Attorney John Huber said he was satisfied with the outcome.

"We can have deeply held political beliefs and philosophies, but we can't act upon anger and commit a crime," he said. "My hope is that it's more of a general deterrent for like-minded people who may want to act upon their philosophies and beliefs in planned violent acts." 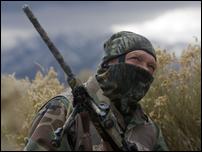 Bridge accused federal agents of entrapment, saying in court papers that the crime was "instigated, refined, and brought to life by the FBI." Undercover agents goaded Keebler into trying to blow up the cabin, he said.

"Of course, the FBI built the bomb, drove Mr. Keebler to the cabin, placed the bomb on the cabin, and handed him the detonator," court document says. "His case raises grave concerns about the FBI’s tactics in a post-9/11 world and gives newfound meaning to the phrase 'manufacturing crime.'"

The cabins were for seasonal use and were occupied by a professor and about 20 college students doing field research, but FBI and BLM agents moved them out before the attempted bombing.

Keebler, he said, had many opportunities during the investigation to get off the path that led to the crime. Barnhart said Keebler's response after he thought he'd blown up the cabin undercuts that argument.

"He certainly was enthusiastic about what he thought he had done and expressed sentiments that he wanted to move on to other acts," Barnhart said. "It was an investigative decision to capture that conversation after he thought he had detonated the explosive."

Prosecutors said Keebler wanted to use explosives and was also willing to shoot people if anyone came after the group when he detonated the device. He had an AR-15-style gun, a handgun and a lot of ammo, they say.

"The overt goals of the Patriots Defense Force were to be a source of protection for the community, to prepare for events such as a military takeover of the U.S. by the U.S. government, defend against overreach of the federal government (as the defendant believed the BLM had done at the Bunkerville Ranch), or preparing for martial law," prosecutors wrote.

Prosecutors say Keebler met with Lavoy Finicum, an Arizona rancher who police shot and killed in Oregon during the Malheur National Wildlife Refuge standoff. Keebler pledged to support Finicum with his militia to target the BLM or in the event the government tried to take Finicum’s cattle due to his nonpayment of grazing fees.

Keebler mounted a “harassment campaign” wherein he would target government buildings or vehicles, particularly those owned by the BLM, in order to harass their employees and interfere with the BLM’s operations, according to prosecutors.