TAYLORSVILLE — A Utah man is among a relatively small number of rescue divers in the Beehive State who have training in cave rescues. He’s been watching the rescue efforts of a youth soccer team in Thailand closely.

From his laptop computer, Wendell Nope shows reporters some claustrophobia — inducing video Friday of him scuba diving through a very tight, winding cave in Logan Canyon. He says aside from some climate differences, the cave has very similar conditions to what rescuers are facing currently in Thailand.

“It’s heartbreaking, to see that situation and know how challenging the environment is,” Nope said.

Nope trains rescue divers for the Utah Department of Public Safety, but he got certified in cave diving and rescue on his own. It’s not something the department does.

Nope says the soccer coach and 12 young boys in Thailand are in a difficult situation. While rescuers are working to pump water out of the cave, the group is, in the meantime, breathing a limited air supply, contained in a pocket of the cave.

“Every person who breathes in that trapped environment is utilizing oxygen, and breathing out carbon-dioxide,” Nope said. 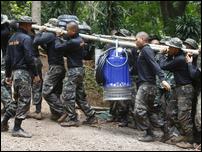 The death of a former member of the Thai navy's elite SEAL during an underwater swim in the partly flooded cave where a dozen boys and their soccer coach are trapped struck a particularly deep chord with Thais, because he was a volunteer on a humanitarian mission that has riveted the nation for two weeks.

Nope fears that rescuers could soon be faced with what he considers to be a last resort: to have the boys and coach scuba dive out of the cave. Even if they are carried out by skilled rescuers, he says there are still significant challenges.

“They still have the physiological challenges associated with diving and the darkness, the murky water,” Nope explained. “Those are all just very unsettling for the human psyche.”

Nope says a combination of those factors, and the fact that he has children around that same age, make the rescue efforts very tough to watch.

“It tears at my heart to know that they’re in this,” Nope said, "not quite (a) helpless environment, but their lives are at risk.”

Mike Anderson
Mike Anderson often doubles as his own photographer, shooting and editing most of his stories. He came to KSL in April 2011 after working for several years at various broadcast news outlets.