10PM: Man named as ‘person of interest’ says he had nothing to do with couple’s disappearance
Andrew Adams, KSL TV

LITTLEFIELD, Ariz. — A man named by investigators as a person of interest in the disappearance of a couple in January said Friday he had nothing to do with it.

Jerry and Susan McFalls, both 62, were last heard from on Jan. 11, and their home was later found practically undisturbed, with a door unlocked and open, valuables in place and even food on the counter.

This week, the Mohave County Sheriff’s Office said 52-year-old David Myhaver, a neighbor, had been named as a person of interest in the case.

“All I can say is B.S., because none of it is factual,” Myhaver told KSL by phone Friday night. “My name is being dragged through the freaking gutter.”

Sheriff’s spokesperson Anita Mortensen told KSL Thursday detectives were weeding out people that may have possibly been involved with the couple’s disappearance, and noted that Myhaver’s wife had previously been charged in a BB gun shooting that left Jerry McFalls with an injury to his stomach.

Friday afternoon, Deputy Mohave County Attorney Rod Albright acknowledged the case against Lida Oakley had been dismissed in February due to the missing status of the McFalls, and that the state planned to bring charges again at a future date if the couple was found.

Myhaver said the matter was a “he-said, she-said” and “nobody saw anything.”

He maintained he had nothing to do with the couple or their disappearance. 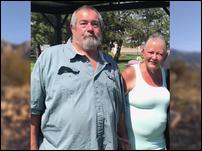 Jerry and Susan McFalls of West Jordan, both 62, were last heard from on Jan. 11. Family members said the couple was traveling back to Utah to take care of some business after being in Arizona before Christmas.

Myhaver said he also kept to himself, and is frustrated his name was put out as a person of interest.

“It’s a nightmare,” he said. “There’s nothing I can do about it, because it’s beyond my control. I have to go with the flow.”

Daughter-in-law Meridee McFalls said she doesn’t believe the couple simply left on their own, and that the family at this point suspects foul play.

“Somebody’s done something to them and it’s a matter of time,” she said. “That’s the most important thing, I think for us — not necessarily who did it, it’s finding mom and dad and getting some closure with them.”

The latest search for the couple was scheduled for Saturday morning at 9:00 a.m. at the Desert Springs fire station.

The McFalls said organizers were planning to do a grid search, and anyone was welcome to help.

Jerry McFalls, Jr. said he believes investigators are on the road to answers.

“Hopefully it’s the road that makes somebody talk and we figure out what happened,” McFalls said.