Utah man murdered couple, dumped their bodies in a mine, police say

EUREKA, Juab County — A Mammoth man who may have been jealous or angry that a young Eureka couple visited his girlfriend while he wasn't there has been arrested and accused of murdering Riley Powell and Brelynne "Breezy" Otteson.

Powell, 18, and Otteson, 17, were last seen near Mammoth, Juab County, on Dec. 30, according to family members. The couple planned to stop in Spanish Fork before going home to Eureka, where both lived with Powell's grandfather.

A police affidavit outlines extremely disturbing details about the deaths of the young couple, including a statement allegedly made by Baum that he made Powell suffer.

Otteson's body was recovered from the mine with her hands tied behind her back and Powell "appeared to have multiple knife wounds as well, and his hands were also bound behind his back," the affidavit states.

After nearly three months of searching, investigators were led to the Tintic Standard Mine outside Eureka on Tuesday. A camera was lowered into the mine, which is more than 1,500 feet deep.

Utah County Undersheriff Darin Durfey said Thursday that luck also played a role in the recovery of the bodies, which were located on a ledge about 100 feet down.

On Wednesday, heavy rescue crews recovered the two bodies, and they were transported to the Utah State Medical Examiner's Office to confirm their identities and causes of death.

Baum was previously acquainted with Powell, according to police. Officers first questioned Baum and his live-in girlfriend on Jan. 9.

"Jerrod is known to law enforcement to associate with the criminal element in and around Eureka and the Juab County area. Officers asked the pair if they had heard anything or if they had seen the missing teens. They told us about a rumor that Riley may have gotten into a fight on New Year’s Eve with another male," the affidavit states.

The last message Powell sent on Facebook was to Baum's girlfriend, saying the two agreed to meet at her house in an hour, according to the report.

On Jan. 11, Powell's missing Jeep was found partially hidden in trees, about a mile south of Cherry Creek Reservoir. Based on the condition of the Jeep, which had two flat tires, investigators said at the time that foul play was suspected.

On Jan. 25, Baum's girlfriend was interviewed again by police. She claimed there was a rumor that Powell and Otteson were involved in a drug deal gone bad, the affidavit says. She also claimed the couple never showed up at her house that night, until the detective pressed her further with questions.

"(The) detective noted that she became very nervous and even scared," according to the report.

The girlfriend eventually admitted that Powell and Otteson had showed up that night and stayed for about 40 minutes to smoke marijuana, the report states. "She stated that she did not know where they went or what happened to them."

She also said she was scared because she was not allowed to have male friends over when Baum and his father weren't home.

The girlfriend, Morgan Lewis Henderson, 34, was pulled over Sunday in Sanpete County and arrested for investigation of drug and weapons charges. While she was being interviewed at the Sanpete County Sheriff's Office, she told investigators a different story about Dec. 30.

This time, she allegedly said Baum had found out that Powell and Otteson had stopped by that night.

"He told her that he had previously instructed her not to have guy friends and that it was too bad because he has never killed an innocent before. She said that their shower smelled strongly of bleach. She said that on New Year’s Eve he burned some stuff in a barrel that smelled like bleach and the flames were green. 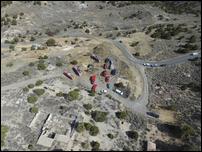 Bodies recovered from mine believed to be missing Eureka couple

Investigators confirmed Wednesday that two bodies recovered 100 feet down an abandoned mine shaft outside Eureka are believed to be a young couple missing since the beginning of the year.

On Monday, Henderson took police to the Mammoth area and showed them a barrel "that contained multiple phones that had been destroyed, several lengths of rope, used duct tape, pieces of a Marlboro cigarette carton, pieces of two knife sheaths, roofing nails, baby wipes, plastic sacks. Also in the barrel was a camo tie down strap that was similar to the one found on Riley’s Jeep," according to the report.

She then took investigators to the area of the mine where she believed the couple was killed.

"It was while she was in this area that she admitted that she had driven the Jeep out to Cherry Creek where she and Jerrod dumped it," the report states.

After the bodies were found on Tuesday, Henderson gave detectives more information.

Henderson said after Powell and Otteson left her house on the Dec. 30, Baum came in a short time later and led her outside.

"They went outside and she saw Riley and Brelynne tied up in the back of Riley’s Jeep. Morgan also stated that Jerrod told her to get in the Jeep and that they would go for a ride to have a talk. They then drove to the area of the Eureka Lilly Mine. While at the mine, Jerrod used a knife to kill both Riley and Brelynne and then dumped their bodies in the mine," police wrote in the affidavit.

As of Thursday, Henderson had not been arrested in connection with the deaths but remained in the Sanpete County Jail for her arrest on Sunday.

Utah County Sheriff's Sgt. Spencer Cannon said Thursday that additional arrests in connection with the killings — possibly for obstruction of justice — are "likely." He called the investigation still "very active."

Neither Bill Powell, Riley Powell's father, or Amanda Hunt, Otteson's aunt, knew Baum or why the couple would have been at his residence. But they were shocked to hear the details of the crime Thursday.

"Why do you have so much hate? There’s no reason," he said. "No reason for anything to happen to anybody."

Baum was charged Feb. 13 with being a restricted person in possession of a weapon. The girlfriend brought a gun to Baum on Jan. 30, which he showed her how to use, according to charging documents.

Baum also pleaded guilty to an amended charge of attempted possession of a dangerous weapon in 2003, court records state.

In 1992, when Baum was just 15, he was charged with attempted murder and 10 other charges. He stole a pickup truck from a Provo business and later a van where he found a .38-caliber handgun, and traveled to Heber City, where he stole a Trans Am. He then went to a Burger King in Orem and used the handgun to rob the business, firing at two employees who followed him into the parking lot.

He was first incarcerated with the Utah Department of Corrections in March of 1993.

While incarcerated at the Central Utah Correctional Facility in Gunnison, Baum was one of five inmates charged with more than 30 felonies in connection with a five-hour riot that occurred on Aug. 9, 1994,and caused an estimated $40,000 in damage.

He was granted parole in 2002, but his parole was revoked in 2003 when he was arrested for attempting to purchase a dangerous weapon, according to prison records. Baum was paroled again in 2004 and sent back to prison on another parole violation shortly after. He was discharged in March 2005.

Baum was placed on probation in June for drugs and weapons-related convictions.