SALT LAKE CITY — Whether a deadly Greyhound bus crash off I-70 near Green River was the result of the driver suffering a medical condition or because he dozed off was still being investigated Monday.

Witness statements appear to provide evidence for both scenarios, according to a search warrant affidavit unsealed over the weekend in 7th District Court.

On New Year's Eve, the bus carrying 13 passengers and a driver was traveling from Denver to Las Vegas when it went off the road near the Devil's Canyon view area in a remote area outside of Green River, and flew into a steep wash, coming to rest about 200 feet off the interstate.

Summer Pinzon, 13, of Azusa, California, was ejected from the bus and killed, and 12 others, including the teen's mother, were injured. The bus driver and two passengers were flown by medical helicopters to hospitals in serious condition.

Several days after the crash, the State Bureau of Investigations had narrowed down the cause to either a medical condition suffered by the driver or driver fatigue. Investigators hoped to review surveillance video from the bus as well as examine the data from the computer on the bus to determine speed and braking before reaching a final conclusion on the cause.

The warrant reveals some of the statements collected by investigators from the other passengers.

One passenger who was sitting directly behind the bus driver told investigators that "they witnessed the driver coughing severely before what appeared to be the driver passing out. This same passenger then tells officers that the driver/operator of the bus slumped forward over the steering wheel. This passenger told officers that at that point, the bus swerved off the road to the right prior to crashing," according to the affidavit. 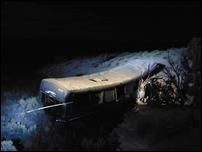 As the deadly crash of a Greyhound Bus off I-70 continued to be investigated, a recording of the first 911 call made from one of the 14 passengers was released Wednesday.

Another passenger reported that the driver "had been complaining of illness and not feeling well. One of the statements to the passenger from the driver/operator was along the lines of, 'Well, I'm here but not really here,'" the warrant states.

Another passenger told state investigators that "the driver had fallen asleep previously and needed to be be awakened by passengers," according to the warrant.

The officer who wrote the affidavit noted that "based on passengers' testimony to investigators, your affiant believes the driver/operator may have not been physically/medically well enough to safely operate the passenger bus yet chose to continue in its operation."

The investigator also saw a bag on the front windshield of the bus that contained a package of cold medicine, the warrant states.

A spokesman the Utah Highway Patrol on Monday said a final determination of what led to the crash has not yet been made.