A bird, a plane, a polar bear? Wild guests at Alaska airport

ANCHORAGE, Alaska (AP) — Scott Babcock was wrapping up an early morning runway inspection at America's farthest north airport when he saw what he thought were a couple of wolves.

He took a closer look through his headlights Thursday and saw something bigger and badder.

Two young polar bears ran away when they saw the Alaska airport worker's truck approach. He made sure to videotape their departure.

"Well, it's just another day at the Will Rogers-Wiley Post Memorial Airport," Babcock says as the bears scamper off.

Most airports only worry about wildlife when dealing with bird strikes, but state officials at the airport in the city of Utqiagvik, formerly Barrow, have to prepare for marine mammals that wander in from the Chukchi Sea and around a fence.

A bearded seal estimated to weigh 450 pounds (204 kilograms) plunked itself down on a runway in October after a storm. The state Department of Transportation warned pilots of "low sealings."

But polar bears are another story. They come with claws, teeth and sometimes lethal attitudes. And at this time of year, when the sun is down all day for the next few months, polar bears can be hard to see.

"Those bears could be 40 yards away from you and you wouldn't know it," said Babcock, an equipment operator foreman.

If someone walked out of building and was trapped between a polar bear and a fence, "things could get real ugly real fast," he said.

Complicating Babcock's job is that polar bears are protected marine mammals. Airport workers are not authorized to chase or harass them. If bears linger, they call in the wildlife management department of the North Slope Borough, Alaska's version of counties. 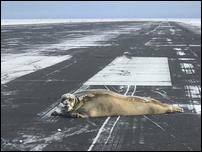 In Alaska, it's not uncommon for wildlife like polar bears to wander onto an airport's runway, but a lounging seal is far more unusual.

The bears got themselves out of harm's way Thursday. They entered the airport before scheduled flights, and 30 mph winds had grounded some local traffic.

When the bears saw Babcock's headlights, they ran to an infield area and eventually a snow dump. The bears hung out for a few hours, disappeared and showed up again Thursday night.

An animal control officer may have chased them off, Babcock said. He figures they were hungry.

Calls to the North Slope Borough and the U.S. Fish and Wildlife Service, which manages American polar bears, were not immediately returned.