“Hopefully, people can start paying a little more attention,” said West Valley Police Lt. Kent Stokes. “Maybe it’s the holiday season and people are busy, but they don't recognize these lights flashing and slow down for these school zones.”

The accident happened around 4 p.m. Thursday near 6000 W. 4190 South. The driver told police the sun was in her eyes and she didn't see the 7-year-old boy crossing the street.

“Unfortunately right now in the afternoons, the sun’s starting to go down about the time the kids are walking home. And that sun is right in your eyes,” Stokes said.

Crisis counselors were at Hillside Friday, where many students had witnessed the traumatic scene or its aftermath. Fortunately, the boy is recovering in the hospital, Horsley said.

“They’re hoping that he’ll be out of critical condition later this afternoon. We understand he went through multiple surgeries (Thursday) night. Obviously, (he has) some extensive injuries,” Horsley said. 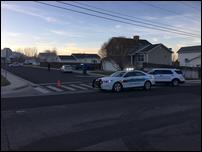 A 7-year-old boy was taken to a hospital in serious condition after being hit by a car on Thursday afternoon, according to police.

The accident is an unfortunate reminder that mornings and afternoons are hectic times around schools, especially with the recent time change from Daylight Saving and the changing weather.

In the mornings, the sun is a problem for students arriving at middle schools and high schools. In the afternoons, it's a problem for elementary schools, Horsley noted.

“You just have to slow down and make sure you’re seeing what’s around you,” he said.

“The sun’s in your eyes,” Stokes said. “Get that visor down there. Try to have some sunglasses, and slow down.”