Mitt Romney is preparing to run for the U.S. Senate if Sen. Orrin Hatch, R-Utah, decides not to seek an eighth term, according to a report Monday in UtahPolicy.com.

Citing unnamed sources close to Romney, the online political news source said Romney is readying for the 2018 race and would be the strongest Republican against the Democrat already running, Salt Lake County Councilwoman Jenny Wilson.

Hatch said Monday that he would "feel good" about retiring if Romney ran.

"As of right now, we're certainly saying we are" running for re-election, the 83-year-old senator said. "But I have to say that I would be very pleased if Mitt Romney did run for Senate. I would feel good about retirement at that particular point."

That's because Romney is "highly qualified, a very quality guy and he would represent Utah very, very well," Hatch told KSL Newsradio. "I’m not trying to appoint somebody. I’m just saying if that happened to come about, I would be pleased."

He later told Politico that he's considering "just about everything" to decide whether he'll try for another six-year term and intends to make up his mind before the year ends.

"Right now, I intend to run again. But who knows?" Hatch said. "By the end of the year, I'll make that determination."

There has been speculation for some time that Romney would seek the seat. Romney, the GOP presidential nominee in 2012 and a former Massachusetts governor, ran the 2002 Winter Olympics in Salt Lake City and now calls Utah home.

Romney, 70, has not commented on the reports but brought up the Senate race in a February interview with KSL and suggested he might run for office again in Utah.

"I don't have any predictions on what I might do. I'm not going to open a door, and I'm not going to close a door. All doors are open," Romney said at the time, apparently ruling out only another run for president.

"I'm not looking forward to anything political at the national level," Romney told the KSL. "We've got some races coming up here in Utah that are going to be interesting. We'll see what happens on that front." 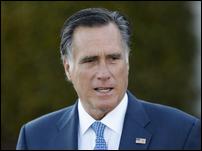 Sen. Orrin Hatch said he would consider ending what would be a 42-year Senate career in 2018 if he "could get a really outstanding person to run," calling Mitt Romney "perfect" for the position.

Hatch himself fueled rumors of a Romney run soon after, telling the National Journal in March he would consider not running for re-election if he "could get a really outstanding person to run," naming Romney as "perfect" for the position.

"We've been hearing these rumors for a while. He has yet to come out and say they are true. But he also hasn't come out to deny them," said Jason Perry, head of the University of Utah's Hinckley Institute of Politics.

Perry said he believes Romney will stay quiet out of deference to Hatch.

"The decision is still entirely Sen. Hatch's to make," Perry said. "We have not seen Mitt Romney to be indecisive, so I don't think that's what it is. He calls it like he sees it."

Romney was among President Donald Trump's harshest critics during the 2016 GOP primary, labeling him a "fraud" and a "phony" in a speech at the U. that made national headlines.

After Trump's election, Romney was among those the president interviewed for secretary of state. But Trump could actively oppose his Senate bid, as he's done with Arizona Sen. Jeff Flake and other Republicans who've crossed him.

"I think the jury is still out," Sutherland Institute President Boyd Matheson said. He said he believes Romney is still trying to determine if the Senate would be the best place for him to make a difference.

"It's not like he needs the Senate to weigh in or be significant on the national stage. He doesn't have to have that," said Matheson, who has been mentioned as a possible candidate for Hatch's seat.

Longtime Romney supporter Kirk Jowers said he thinks it's "genuinely up in the air" whether Hatch will run again, especially since he could remain chairman of the powerful Senate Finance Committee until 2020 under Senate rules.

But he said there's no hurry for Hatch to decide because Romney is "in the catbird's seat if he wants this seat" thanks to his popularity among Utah voters.

"It is a great situation for Mitt because he can literally organize and fund the entire campaign in a weekend, and no one else can do that. So Sen. Hatch can take all the time he wants," Jowers said.

A majority of Utahns do not think Sen. Orrin Hatch should run for an eighth term in office, according to a new poll.

Other potential Republican candidates, Rep. Chris Stewart, R-Utah, and Utah Valley University President Matt Holland, were not as strong against Wilson as Romney, the poll found.

The poll was conducted by Dan Jones & Associates Aug. 30-Sept. 5 of 608 registered Utah voters and has a margin of error of plus or minus 3.97 percent. It did not identify candidates by their political affiliations.

"I don't think it makes that much difference," pollster Dan Jones said.

He said voters "think a lot" of Hatch but really don't want to see him run again. The polls is putting pressure on Romney to get in the race, Jones said, something he feels would happen should Hatch step aside.

"I don't think a poll would stop (Hatch) from running. He's going to decide later on," Jones said. "My guess is he will not run because he has someone like Mitt Romney or Chris Stewart and maybe even Matt Holland to run in his place."