SALT LAKE CITY — The Trump administration again called for the release of a Utah man imprisoned in Venezuela in a new round of financial sanctions on the South American country.

"The United States is very concerned about the situation of Joshua Holt, a young American being detained illegally by the (President Nicolas) Maduro regime for over a year now. We once again call for his immediate release on humanitarian grounds," according to an executive order President Donald Trump signed Friday.

Holt, a 25-year-old former LDS Church missionary, traveled to Venezuela to marry a woman he met online while looking for Spanish-speaking Mormons to help him improve his Spanish.

Venezuelan officials allege he was using his wife's apartment to stockpile weapons and have suggested his case is linked to other unspecified attempts by the U.S. government to undermine Maduro's socialist rule amid deep economic and political turbulence.

In a letter from jail, Holt said the assault rifle and a grenade found in his wife's apartment were planted when he refused to pay police a bribe during a routine raid in the government-built housing complex where he was staying with his wife and her son.

Sen. Orrin Hatch, R-Utah, who has been working to free Holt, lauded Trump's renewed call for the Riverton man's release on Twitter, and asked followers Friday to retweet his posts. 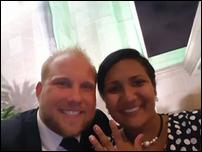 Venezuela's chief prosecutor has requested the conditional release of a Utah man and his wife detained for over a year on weapons charges.

"We need your help more than ever to spread the word about Josh and help pressure those who are holding him," Hatch tweeted.

Rep. Mia Love, R-Utah, also welcomed the sanctions. Love said she has stood with Holt's mother, Laurie Holt, many times over the past year to put pressure on the government to intercede.

"Our office has relentlessly appealed to the previous and current president to make Josh's release a priority, and finally the president has responded," she said in a statement.

The U.S. House passed a resolution last year calling for the release of Holt and other political prisoners in Venezuela. Then-Secretary of State John Kerry raised Holt's jailing during a meeting with Maduro last September, and a senior State Department official traveled to Caracas twice in part to push for his release.

As you likely know by now, Josh was arrested on false charges in Venezuela, and has been held for over a year https://t.co/H39RZKqFTf#utpol

We need your help more than ever to spread the word about Josh and help pressure those who are holding him. #utpolhttps://t.co/N1gGKBkoph

The Associated Press reported then that a former Obama administration official said the decision to sanction El Aissami was held up last year, at the insistence of the State Department, for fear it could interfere in a Vatican-backed attempt at talks between the government and opposition, as well as efforts to win Holt's release.