And should the Senate confirm him as the next U.S. ambassador to Russia, the seasoned diplomat will have his hands full when he lands in Moscow.

President Donald Trump announced Tuesday that he will nominate Huntsman for what will be a high-profile post at a time of tension between the two countries.

Huntsman will first go before a Senate confirmation committee, which makes a recommendation to the full Senate.

"It will be a time for Democrats to air every one of these Russian allegations against a Trump nominee, and Huntsman is going to have to deal with that," said Kirk Jowers, former head of the University of Utah's Hinckley Institute of Politics.

"It’s going to be difficult for people who really like Huntsman in one way because he’s going to get hit with things he has nothing to do with it."

Huntsman's consideration comes as Congress and a special counsel investigate Russian meddling in the 2016 presidential election, and whether Trump's campaign had ties to Russia. Russian President Vladimir Putin has denied any interference, and Trump has said there was no collusion with Moscow.

Huntsman also could be questioned about wanting Trump to drop out of the presidential race last fall after crass comments Trump made about women surfaced in an "Access Hollywood" video.

Huntsman, who had reluctantly backed Trump but urged Never Trump Republicans to get behind him, called for Trump's running mate, Mike Pence, to move to the top of the ticket.

Few people go before the Senate and come out unscathed, Jowers said on KSL Newsradio's "The Doug Wright Show." But he said he expects Huntsman to handle the questions that come at him and be confirmed.

Huntsman would replace John Tefft, a career foreign service officer appointed by President Barack Obama in 2014 who has also served as U.S. ambassador to Ukraine, Georgia and Lithuania.

The Kremlin and Washington had an icy relationship when the Senate confirmed Tefft. The administration faces "some of the most challenging times in the relations between the U.S. and Russia since the end of the Cold War," he said during testimony to the Senate Foreign Relations Committee three years ago. 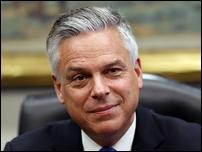 Trump to nominate Jon Huntsman Jr. as ambassador to Russia

Trump in the White House has added another layer of complexity.

"You can’t even fathom how difficult this job is going to be with everything swirling. It’s every day a Trump-Russia headline, and Huntsman is going to be at the center of that storm," Jowers said.

"I sincerely hope having an ambassador like Jon Huntsman in Russia will smooth some of the serious issues between our two countries right now, and we do have some serious issues," Hatch said on "The Doug Wright Show."

Huntsman's name for the ambassadorship first surfaced in March, and the White House acknowledged he was Trump's pick, though the president didn't formally nominate him then.

Hatch attributed the lag to Trump being "beset with all kinds of false issues, slander and libel and everything else. It’s just incredible. The Democrats are just continually throwing all kinds of bad things at him. It’s the worst I’ve seen any president treated."

The longtime senator said he's "really proud" of Trump for choosing Huntsman when he probably had a lot of people saying he shouldn't.

Hatch said the confirmation process could take a few months, though the Senate knows Huntsman from his previous service as U.S. ambassador to Singapore and China.

"He's not someone they don't understand or don't know," he said.

Hatch said he hopes the confirmation goes quickly because "with all the problems that have been cropping up, and some of them manufactured with regard to Russia, it would be nice to have an ambassador there."