SALT LAKE CITY — A jury trial for a prominent Latino activist charged with rape was pushed back Monday due to scheduling conflicts.

Because of problems scheduling expert witnesses, attorneys on both sides agreed to reset a three-day jury trial that had been set to begin Aug. 2 for Tony Yapias, a well-known activist for Latinos in Utah.

Meanwhile, Yapias' attorney told the judge that plea negotiations in the case are ongoing. As he left the courtroom Monday, Yapias said that between ongoing talks and preparing for trial, he isn't concerned by the latest delay.

"What's important is that it's done right," Yapias said. "I have all the time in the world."

Yapias, whose full name is Adolfo Tony Yapias-Delgado, will return to court Sept. 18 for a scheduling conference, just days after the one-year mark since charges were filed against him. He has maintained his innocence.

Yapias, 50, is charged with rape, a first-degree felony, and tampering with evidence, a class A misdemeanor.

Prosecutors allege Yapias went to the home of a former longtime girlfriend who had recently broken off their relationship in March 2016, despite receiving texts from her telling him not to come, according to charging documents. 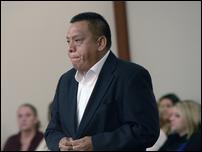 Prominent Utah immigration and Latino activist Tony Yapias waived a preliminary hearing Tuesday and again proclaimed his innocence in the rape case against him.

At some point after arriving at the woman's residence, there was sexual intercourse, which Yapias claims was consensual. The woman reported the alleged rape to police and others that same day, "despite her fears and concerns with respect to immigration issues," court documents state.