WASHINGTON (AP) — The Russian-American lobbyist who attended a meeting at Trump Tower last year is a former military officer who has attracted congressional scrutiny over his political activities and has been shadowed by allegations of connections to Russian intelligence that he denies.

Rinat Akhmetshin confirmed his participation in the meeting to The Associated Press on Friday, providing new details of a June 2016 sit-down that included a Russian lawyer and President Donald Trump's oldest son, son-in-law and campaign chairman.

His attendance at the meeting and his lobbying background created a new wrinkle to a story that has hounded the White House for days and added to questions about potential coordination between Russia and the Trump campaign.

Akhmetshin is well-known in Washington for his advocacy efforts. He's been outspoken in recent years about a U.S. law levying sanctions on Russians and has worked to undermine the public narrative used to justify the bill. And his name has also surfaced in multiple American lawsuits, including one involving the hacking of a company's computer systems.

Emails released this week by Donald Trump Jr. show the president's son agreed to the Trump Tower meeting with the idea that he would receive damaging information on Hillary Clinton from someone described to him as a "Russian government attorney." Akhmetshin began working with that attorney, Natalia Veselnitskaya, in 2015, after a public relations person he declined to name introduced them.

The Russian government has denied any involvement or knowledge of the meeting. Asked Friday about Akhmetshin, Russian President Vladimir Putin's spokesman, Dmitry Peskov, told reporters: "We don't know anything about this person."

In an interview, Akhmetshin denied suggestions made in media reports, congressional letters and litigation that he is a former officer in Russia's military intelligence service known as the GRU, dismissing the allegations as a "smear campaign."

Akhmetshin, a naturalized American citizen who has lived in Washington since the early 1990s, and Veselnitskaya are known for lobbying efforts involving the Magnitsky Act, a brace of economic sanctions targeting Russian officials and individuals

The act passed by Congress was named for Russian lawyer Sergei Magnitsky, who died in a Russian prison in 2009 after accusing Russian government officials and takeover raiders of a $230 million tax fraud scheme in the seizure of an investment firm.

A Global Magnitsky Act that passed in December 2016 gives the president power to impose visa bans and freeze U.S. assets of anyone who suppresses basic human rights or targets whistleblowers exposing corruption.

Early in 2016, Akhmetshin said, he helped set up a non-profit foundation based in Delaware to lobby U.S. officials in an effort to strip Magnitsky's name from the law, though he maintains that he was not attempting to undercut it.

As an adjunct to the foundation's lobbying, Veselnitskaya also organized and attended a screening of an anti-Magnitsky documentary film that played at the Newseum in Washington four days after she met with Trump Jr. in New York. Akhmetshin acknowledged he was also involved in promoting the film. 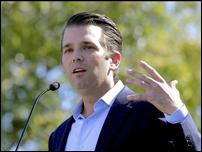 Among them, he said, was Dennis Katsyv, the owner of a real estate investment firm who was battling against a Justice Department lawsuit at the time connected to the seized investment firm.

The federal government this year settled with Katsyv's firm, allowing the company to pay a $6 million fine without admitting guilt.

Congressional lobbying documents show that the foundation Akhmentshin helped set up spent $290,000 last year on lobbying. At least $10,000, the records indicate, was paid directly to Akhmetshim as a lobbyist.

Akhmetshin's name has also surfaced in lawsuits, including a New York court case in which a mining company branded him a "former Soviet military counterintelligence officer" and accused him of involvement in the hacking of its computer systems. Those claims were withdrawn last year, court records show.

In a separate case, he described his business as "strategic communications" with clients including national governments and high-ranking officials of those governments. Disclosure of his communications, he said, could put lives at risk.

Akhmetshin said he has not been contacted by the special counsel's office or the FBI about the meeting with Trump Jr. He said he's willing to talk with the Senate Judiciary Committee, whose chairman has pressed the Justice Department about why Akhmetshin has not registered as a foreign agent.

The chairman, Republican Chuck Grassley of Iowa, said in a March letter that Akhmetshin has "reportedly admitted to being a 'Soviet counterintelligence officer' and has a long history of lobbying the U.S. government for pro-Russia matters."

Akhmetshin said the Justice Department prodded him several months ago to register as a foreign agent because of his lobbying work, though he said he doesn't believe he needs to do so. He has previously registered with Congress for the lobbying, and he plans to raise this issue before Grassley's committee.

"I think I have a legal right to tell my story," he said.