WASHINGTON (AP) — Psst. Wanna hear something bad about your opponent?

As any political strategist can attest, opposition research is a lifeblood of campaigning, with documents, recordings and tips streaming in from all directions claiming evidence of a rival's misdeeds.

"Oppo research," as it's also known inside the Washington Beltway, burst onto the public stage with the disclosure that Donald Trump Jr., the president's eldest son, welcomed an offer to get dirt on Hillary Clinton from a Russian lawyer. But oppo has been a booming business in political circles for years.

Here's what it is:

THE DEFINITION OF OPPO

Put simply: It's the goods on an opponent — which is often pretty bad. Research can take the form of anything from arrest records to recordings of a candidate saying something untoward. It's all about building a negative story line about an opponent, preferably one that taps into doubts voters might already have.

Opposition research was largely a campaign side project until this decade. Ahead of the 2016 presidential race, it fully blossomed into a multimillion-dollar industry because deep-pocketed donors saw it as the perfect way to spend their money.

"Some people have this idea of opposition research being shady people diving around in dumpsters," said Colin Reed, senior adviser to America Rising, a Republican-supporting oppo group. "But in the last few years it has become accepted by most campaigns as just as critical as get-out-the-vote and communications operations."

America Rising started tracking Clinton in early 2013. Its Democratic counterpart, American Bridge, kept tabs on more than a dozen Republican presidential hopefuls beginning in 2011 — before the previous presidential race was even over.

Dozens of other boutique oppo firms also have sprung up. Some are registered as political action committees, meaning the public can see who is donating and how the money is being spent. Many others are private companies or even nonprofit groups that keep their finances under the radar. That's part of why wealthy donors like them so much.

WHERE IT COMES FROM

As smartphones have become ubiquitous, oppo groups and the campaigns themselves deployed "trackers" to follow their political nemeses' every move, documenting everything they can.

One example of a recording making a difference: In August 2012, an American Bridge tracker assigned to monitor Missouri's Republican Senate candidate, Todd Akin, heard him talk about "legitimate rape" during a local morning show. The group blasted the clip out to the media. His campaign never recovered. 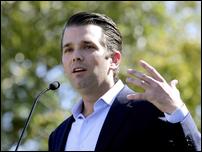 A meeting between President Donald Trump's eldest son and a Russian lawyer during the presidential campaign occurred at the behest of a Moscow-based singer with family ties to Trump's businesses.

Researchers also pore over paperwork, looking for every scrap of information that voters might find compelling. Reed says the "vast majority" of opposition research involves publicly available records, compiled by professionals into easily digestible memos. In fact, America Rising has a full-time employee who does nothing but file Freedom of Information Act requests.

That sort of document work has been proving its worth for years: Think back to 2008 Democratic presidential candidate John Edwards's $400 haircut — not a great look for a candidate pitching himself as an everyman. An adviser to Barack Obama's campaign later outed himself as the source of the Politico scoop; saying it was an opposition researcher who'd plucked it out of a publicly filed campaign finance report.

WHAT CAMPAIGNS DO WITH IT

Once a campaign or outside group gets juicy oppo, they must decide what to do with it. Sometimes, the information becomes what voters say they hate most about elections: attack ads. There are rules about patently false advertising, but in politics, truth-stretching abounds.

Other times, oppo is shared with reporters in the hopes of generating what's called "earned media" — that is, publicity that they don't have to pay for. When political operatives hand off information to journalists, they often ask for anonymity. Reporters must weigh the ethics and news value of the information they're given, and, of course, verify it.

Increasingly, Reed, says, oppo is going straight to voters in the form of social media posts. America Rising has been posting video directly on the internet.

"I don't know if there has ever been a time when that transparency has been more important than it is today," said Adrienne Watson, communications director of the Democratic National Committee's ongoing opposition research project on Trump.

The bitterly fought 2016 presidential race featured 17 Republican candidates on one side and on the other a come-from-nowhere senator who hadn't even been a member of the party versus a seasoned politician. Then Clinton and Donald Trump squared off in a race overflowing with money and bad blood.

Those factors contributed to some of the more boundary-pushing — and some argue illegal — opposition research ever seen. Last year, a private research firm compiled a dossier making unproven allegations about Trump, including that there was close coordination between his inner circle and Russians who hacked into Democratic email accounts. The firm's work was first funded by a wealthy Republican and then picked up by Democrats; none of those patrons have been revealed.

Now comes the revelation that in June last year, just before the general election campaign began, Trump Jr. was eager to receive information from Russian sources about wrongdoing by Clinton.

Although Trump Jr. defended himself by saying he felt he "had to listen," political operatives in both parties denounced the incident.