SALT LAKE CITY — The Jazz were dealt a nearly unfathomable blow on the Fourth of July, when All-Star Gordon Hayward opted to leave the organization, seven years after being drafted by the franchise, for the Boston Celtics and his former college coach, Brad Stevens.

Hayward’s decision lasted a disastrous six hours from when it was first announced by ESPN’s Chris Haynes to Hayward finally confirming his decision in The Player's Tribune. During the gap, the Jazz held tight, awaiting a final decision before executing a contingency plan pursuing other players. By that time, several of the league’s high-profile free agents had signed elsewhere, including Otto Porter, who the Jazz would have reportedly targeted in Hayward’s absence.

The Hayward era comes to an end, standing as both a beacon of the greatness of the Jazz organization and a cautionary tale for the organization's modus operandi. Patience may be a virtue, but it can also be a villain. And in Hayward’s case, it was both.

First, the Hayward era in Utah started long before June 24, 2010, when the Jazz drafted him with the ninth pick of the NBA draft. The groundwork for Hayward’s arrival in Utah began in February 2004, when the Jazz acquired an unprotected future first-round pick from the New York Knicks, along with an additional first-round pick, an aging and expensive Tom Gugliotta, by way of the Phoenix Suns in exchange for Ben Handlogten and Keon Clark.

The Jazz, who at that point had made 20 consecutive trips to the NBA’s postseason, weren’t fond of building their roster through the lottery, at least not as a product of their own misfortune. The opportunity of landing a lottery pick, even six years down the line, without having to take a major step backward on the court was a tantalizing opportunity.

As the Knicks continued to flounder throughout the early 2000s, failing to finish above .500 at any point between 2004 and 2010, the value of the unprotected pick grew substantially. The Jazz opted against trading the pick for more proven players, hoping to land a franchise piece simply through patience and wise financial planning.

Though the Hayward selection drew extensive and fool-headed criticism from fans and media (myself included), the Jazz ended up with the last laugh. Hayward improved significantly over his seven-year stint with the team, transforming from a skinny understated Indiana boy to an All-Star and a top 20 player in the league. The Jazz investment dating back to 2004 yielded them an upper-echelon player and a franchise piece, requiring little beyond patience in return.

And then he was gone.

No ceremony, no full-page spread (except the one from the team — another classy gesture) thanking the organization, and to date, nothing in return by way of a sign and trade. Just a six-hour stretch on a national holiday when Hayward left the organization in the dark, followed by phone calls from his agent to the organization, and a couple of text messages to general manager Dennis Lindsey.

Ultimately, all the patience around Hayward, 13 years and 4 months worth in total, yielded four playoff wins in 15 tries. One All-Star appearance, one playoff series victory and three seasons of better than .500 basketball with Hayward on the roster. 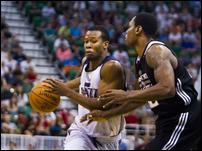 Ex-Jazz teammate Hood: Hayward decision surprising, but 'I support him'

Gordon Hayward met with Jazz brass last Monday to discuss his future as a free agent before announcing Tuesday that he would be joining his college coach in Boston. His decision, though, was a surprise until the big day.

During Hayward’s stretch in Utah, especially after Deron Williams was traded to Brooklyn, the Jazz provided little in the way of veteran support for Hayward to reach their highest highs before last season. Beyond acquiring Marvin Williams (at the cost of Devin Harris), the team resisted making needle-moving transactions to build the roster.

The team again relied on the development of younger players like Derrick Favors, Alec Burks, Enes Kanter, Dante Exum, Rodney Hood and Rudy Gobert to build around Hayward. The Jazz let Marvin Williams, Paul Millsap and Al Jefferson leave the franchise, getting nothing in return to clear the way for these younger pieces to develop. The results were mixed.

Kanter asked out of the rebuilding process in unflattering fashion. Burks and Exum have yet to live up to their enormous potential, while Favors has been plagued by injures. Only Hood and Gobert have significantly outperformed their draft positions in the Jazz rebuild.

This past season, Hayward finally got a taste of what his future could look like with the Jazz. In addition to his first All-Star appearance, Hayward saw his burden of carrying the team eased by the additions of veterans George Hill and Joe Johnson. The Jazz made the playoffs and defeated the Clippers in a dramatic seven-game series.

Again, the Jazz patience had paid off on the floor.

Again, just two months after their greatest achievement with Hayward on the roster, the Jazz are facing a future without the star.

Lindsey said at the end of the 2015-16 NBA season that the team was close to acquiring two proven veterans at that season’s trade deadline, perhaps those two would have propelled the Jazz into the playoffs. Maybe that would have made the case for Hayward to stay.

Yet they entered the season with Trey Burke as the starting point guard, knowing he’d been replaced midseason the year before by a 19-year-old rookie in Exum who was going to miss the season with a knee injury. The team regularly entered and exited the season under the league’s salary cap, failing to maximize available financial opportunities. Preferring flexibility to on-the-floor results.

Perhaps none of it would have mattered. Hayward may have been destined for Boston all along. The Celtics certainly never seemed to panic this summer when they saw both Paul George and Jimmy Butler traded to Western Conference teams, remaining steadfast in their confidence that they’d land Hayward, while having to offer nothing in return. Or perhaps one more trip to the playoffs, or one more free-agent signing would have convinced the star to stay.

It’s irrelevant until Hayward says otherwise, and even then, it remains a story of what could have been.

Lindsey spoke to the Jazz's long-term approach during the Jazz summer league game against the Los Angeles Clippers on Sunday, stating that without the guidance of the Miller family as the owners of the organization, he’d “be as short-term oriented” as any other general manager in the NBA. With that being the standard set, fans should expect a continued long view of team-building by the team’s front office.

The Jazz showed incomparable patience throughout the Hayward era, dating back to 2004 when the draft pick used to select him was acquired, through last week, when he chose to leave the organization. The team’s long play delivered an All-Star and playoff series victory to what looked like a team on the brink of greatness. And yet, the team’s patience may have outlasted Hayward.

The final line of Hayward's article in The Player's Tribune stated his ultimate desire was to “win a championship,” something that he must have felt was more realistic in Boston than in Utah, regardless of the team’s recent advances. For Hayward, a single playoff series victory may have been too little, too late.

The Jazz’s patience has made them a truly great basketball franchise for the past three decades, investing in John Stockton and Karl Malone for two decades, and Jerry Sloan a decade beyond that. Hayward helped usher in a new era, marked by a modernization on the floor in style of play, but draped with the same patience practices over the previous 30 years. And while it benefited the Jazz in past eras, it may have failed them this summer.

If the Jazz's wait-and-see approach since Hayward left for Boston is any indication, the Jazz will continue to rely on patience when it comes to rebuilding. But the organization needs to recognize that patience, which has historically served as the team’s best friend, may currently be its greatest foe.