SALT LAKE CITY — A Pleasant Grove doctor convicted of murdering his wife will not get a new trial, the Utah Court of Appeals ruled Friday.

MacNeill was accused of overmedicating his wife after her facelift and leaving her in a bathtub to die while trying to make it look like an accident. The case garnered attention nationwide because he was a wealthy doctor and attorney accused of killing his beauty queen wife so he could begin a new life with his mistress.

MacNeill maintained his innocence throughout and was convicted largely on circumstantial evidence. No official cause of death was determined.

He appealed his sentence, claiming he was convicted solely on false testimony provided by a former fellow jail inmate who was promised a shorter sentence by prosecutors in exchange for his cooperation.

"At trial the prosecution presented testimony from five jailhouse informants, all of whom reported hearing MacNeill admit or imply that he had killed his wife. MacNeill’s principal claim on appeal is that the prosecution team withheld information about promises of assistance the state’s lead investigator, Jeff Robinson, had made to one of the jailhouse informants," the Utah Court of Appeals stated in its decision. 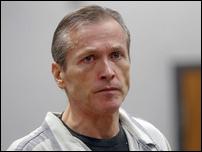 Martin MacNeill claims his murder conviction was based on false testimony

Attorneys appealing the conviction of a Pleasant Grove doctor found guilty of murdering his beauty queen wife say the circumstantial case hinged on false testimony from a prison informant.

The court of appeals on Friday said it agreed that "the prosecution had wrongly suppressed relevant impeachment evidence," however, "the evidence would not have altered the trial outcome."

The court noted that all five informants testified that MacNeill made references to killing his wife.

"A jury verdict is supported not only by the testimony admitted into evidence, but also by the inferences that a jury may reasonably draw from that testimony. Inmates Two, Three, and Four also testified that they asked MacNeill whether he murdered his wife. MacNeill answered that 'they couldn’t prove it,'" according to the ruling. "A reasonable person could interpret these responses as more likely to be offered by a guilty man than an innocent man."

As for the inmates lacking credibility, the appeals court ruled that MacNeill's defense team did its job during cross-examination and "exposed cracks in their credibility" for jurors to consider.

"In sum, the premise of MacNeill’s argument — that a criminal conviction must rest on direct evidence — is incorrect as a matter of law, and MacNeill’s claim that only one jailhouse informant testified that MacNeill explicitly confessed to the murder is incorrect as a matter of fact," the court ruled. "Ignoring incriminating evidence does not make it go away. The circumstantial evidence recited above gave the jury 'a basis in logic and reasonable human experience' to conclude that MacNeill wanted Michele out of the picture."