PROVO — BYU began spring football Monday, the second season of the Kalani Sitake era. Unlike his first season, this year belongs totally to the new head coach and the staff he’s put together.

In the interim, he had to move from Oregon to Utah and build a staff, including convincing elusive BYU legend Ty Detmer to take over as the team’s offensive coordinator.

Oh, and he inherited one of the most revered quarterbacks in BYU history, Taysom Hill, who chose to return to the school after a season-ending foot injury in 2015, which made way for newcomer Tanner Mangum to break freshman records as a quarterback at BYU.

Hill announced he was returning to the Cougars just 14 days before Sitake was due to make his head coaching debut at spring camp.

But while the win total marked a strong end to the noteworthy careers of Hill and Williams, the dream marriage of Hill, the do-it-all mega athlete at quarterback, and Detmer, the former Heisman Trophy winner and passing guru, never quite left the honeymoon stage.

Through four games, Hill was plagued by poor accuracy and interception issues on a staggering amount of passing attempts. Hill averaged 37.5 passing attempts per game, and BYU stumbled to a one and three start.

Sitake and Detmer switched to a less pass-happy attack, similar to Hill’s highly successful, albeit injury-shortened, junior season, and proceeded to win seven of eight games with Hill as the starter.

While making the switch was the correct move, as the Cougars relied heavily on Hill’s unique talents to build a successful season, it didn’t appear to be the plan of the Cougars’ coaches when the season began. 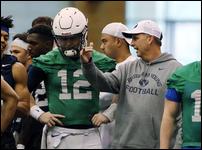 No competition for starter, but BYU quarterbacks open spring camp with plenty to prove

No. 7 was back in uniform as BYU football opened spring practice Monday at the Indoor Practice Facility in Provo.

This season, with Hill having graduated and Mangum set to make his triumphant return from his role on the sidelines, don’t be surprised to see Sitake and Detmer’s high-powered offense toyed with again through spring ball.

Mangum has completed 60 percent of his career passing attempts, upping his freshman average of 59.9 percent to an impressive 66.7 percent in four appearances as a sophomore under Detmer. In comparison, Hill completed just over 58 percent of his attempts through five seasons at BYU.

In addition to returning to a more pass-friendly offense, Sitake will have a longer tenured staff this season, after he, Detmer and defensive coordinator Ilaisa Tuiaki all served in their individual coaching roles for the first time last season.

Though no coach is ever perfect, regardless of their tenure at their position, more coaching experience may lead to fewer clock management issues, or bizarre play calls, like the fake punt attempt on fourth and 19 in the shadow of their own goal posts against Boise State.

Sitake will also welcome his first full class of recruits this season, no longer trying to maintain the relationships built under Bronco Mendenhall in a mad dash to land any recruits still interested in the BYU program.

Sitake’s class this season is highlighted by safety Chaz Ah You, who should compete for playing time in the secondary in the absence of Kai Nacua. Sitake landed three of the state’s top 10 recruits, including Ah You and Langi Tuifua, who were ranked as the state’s third and fourth best recruits by rivals.com.

Sitake had a very successful first season at BYU, winning nine games and never looking like his team didn’t belong on the field. But while the Cougars won at an impressive rate, I don’t believe the Taysom Hill-led offense, manned by Bronco Mendenhall recruits, will ultimately represent the Sitake era at BYU.

As spring football is in full swing at BYU, so is the Kalani Sitake era.

Ben Anderson is the co-host of Gunther and Ben in the Afternoon with Kyle Gunther on 1320 KFAN from 3-7, Monday through Friday. Read Ben's Utah Jazz blog at 1320kfan.com, and follow him on Twitter @BenKFAN.