SALT LAKE CITY — Pressure is mounting behind the push to uproot the Outdoor Retailer show out of Salt Lake after two decades in the city, a response to a state resolution opposing Bears Ears National Monument.

A Colorado nonprofit group launched a public campaign Wednesday hoping to woo the massive trade show out of the state after its contract with Salt Lake City expires in 2018. But if the lucrative event leaves Utah, tourism representatives say the economic consequences would reach further than many realize.

Meanwhile, exhibitors scheduled to attend the twice-yearly trade show face a line in the sand after major retailers have vowed to boycott the summer event, while the show's director is calling on participants to instead keep their spot and join in advocacy efforts while they're in town.

The Outdoor Retailer show announced earlier this month it will be taking bids to move the show out of Utah after the founder of outdoor clothing company Patagonia said he cannot in good conscience attend the event in light of the state's position on public lands issues, including vehement opposition to the Bears Ears National Monument designation.

The governor will also meet Thursday with the Outdoor Industry Association, the trade show's advocacy partner, though that meeting looks to happen after the 10 a.m. press conference.

Amy Roberts, executive director of the Outdoor Industry Association, said the meeting was called specifically to discuss retailers' compounding concerns about state leaders' stances on public lands, including efforts to take over federal lands, the sale of public lands, and most recently, a resolution passed by the Legislature calling on President Donald Trump to rescind the monument designation for Bears Ears.

The monument received its title from former President Barack Obama just a few weeks before he left office.

Roberts said she is hopeful Herbert will be willing to hear the concerns of executives from companies in the association, but if he isn't, the decades-old relationship between Utah and the Outdoor Retailers show could be at a tipping point.

"I think the content of this discussion (Thursday), while not necessarily definitive, is going to be really important to understanding do we have an opportunity to move this conversation forward or are we at an impasse," Roberts said.

The Outdoor Industry Association sees public lands as an essential foundation for the industry, Roberts said, and has spent years working to preserve them. Because the major industry trade show has been in Utah during that time, the state has become "ground zero" in the public lands debate, she said.

The association has come up against the state regarding public lands issues in the past, Roberts said. Sometimes the state has yielded to their petitions, and sometimes it hasn't. Now, she says, the association will tell the governor that the state is at a crossroads.

"There is an opportunity for the Utah political leadership to embrace the outdoor recreation economy and really grow that economy in the state, but it's going to take a change of attitude and a change of approach," she said.

Roberts pointed to the line of retailers who have opted to lay their business aside and not participate in the show until it moves to a state more friendly to public lands issues.

In a statement issued Tuesday, Outdoor Retailer Show Director Marisa Nicholson shared appreciation for companies that have declared solidarity with the show and pledged to split their time in Salt Lake advocating on behalf of public lands.

"This is not a one-and-done issue. While Bears Ears National Monument status is a lightning rod, it is just the most currently visible example of what will be a long, hard series of fights the outdoor community needs to not only raise our voices about, but, even more importantly, about which we need to be heard," Nicholson wrote.

Matt Anderson, a public lands policy analyst at the Sutherland Institute, a conservative think tank, warns that debating the issue through public proclamations rather than two-way negotiation cuts out concerned voices and limits chances for an amicable resolution.

"Ultimatums do not produce principled legislation or compromise, they simply restrict dialogue and they don't allow everyone to come to the table and get together," Anderson said.

Specifically, Anderson said he believes rural communities that rely on the debated public lands for their livelihoods have been forgotten amidst the controversy.

"There used to be a healthy debate about this, with both sides coming together and realizing they're not going to get everything that they want, but that a little compromise can go a long way," Anderson said.

Anderson emphasized that the Sutherland Institute wants the Outdoor Retailer show to stay in Utah and welcomes conversations from any of its members who want to talk.

As the political drama plays out in Utah, a half-page advertisement appeared Wednesday in the Desert News and Salt Lake Tribune from the nonprofit group Conservation Colorado, which issued an invitation to the trade show and its retailers printed on a lush Rocky Mountain landscape.

"But most of all, we love our public lands," the ad says.

The advertisement is currently running just in the two Salt Lake newspapers, but will expand to include personal petitions to industry leaders as well as an online campaign.

"We believe that here in Colorado we are deeply committed to protection of and stewardship of our public lands, and that is a value that the outdoor industry has said they are looking for as they initiate these conversations to change the location of the show," said Jessica Goad, Conservation Colorado's communications director.

Colorado's Democratic Gov. John Hickenlooper began campaigning in late January, saying his state is a better venue to host the Outdoor Retailer show. Herbert has countered, saying that Colorado has only 4 acres of public land per capita compared with Utah's more than 12 acres, and that Utah has the largest active watershed and wildlife habitat restoration program in the nation.

Salt Lake and the Salt Palace Convention Center have grown up around the trade show, says Visit Salt Lake CEO Scott Beck, and their sustainability efforts have kept pace with Outdoor Retailer's values. When the city makes its bid to keep the trade show, Beck said those advances and ideals will be emphasized.

If the trade show were to abandoning Salt Lake specifically for Denver, Beck said, it would give up a convention center with a considerably smaller carbon footprint, would be forced to drive more because of fewer public transit options and would have to commute more than double the distance from the airport.

"We do hope that it will be looked at holistically, because if the industry is true to their word, they can't look just at being in a state that wants them more because of their view on public lands in a community that is not sustainable on any level," Beck said. "If it's just about public lands, then the rhetoric of the industry, I don't think, has any soul to it." 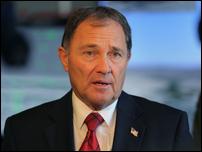 Herbert on Outdoor Retailer show: 'I think we can come together'

Utah. Gov. Gary Herbert said he is anxious to meet with organizers of the Outdoor Retailer show to detail why Utah remains the best public lands state to host the lucrative convention.

Thousands of Outdoor Retailer attendees spend an average of $1,019 each in Salt Lake, according to an assessment by Visit Salt Lake and the Kem C. Gardner Policy Institute, meaning that the two events combined inject nearly $50 million annually into the city's economy.

But that's just 10 days worth of economic activity, Beck says, going toward things like restaurants, hotels, shopping and local attractions.

"The economic impact is exponentially higher," according to Beck, who said the show's reach is compounded by the time it has spent in Utah.

The attendee spending estimate doesn't factor in expenditures like paying a local electrician to build a vendor's booth, printing promotional materials through area companies or renting a storage unit year-round for use between events. It also doesn't account attendees putting on private events around the state before or after the trade show.

And after those additional expenditures are made, Beck says, Utahns being paid in connection with the event go out and use the money they make, buying soccer cleats for their children, eating in restaurants or shopping in the state.

"There's indirect or induced activity around that, and typically that can be three or four times the impact of the delegate spending," Beck emphasized.

Simply filling the Salt Palace for the dates the Outdoor Retailer show normally would have taken can't fill the void that would be left behind, Beck said.