SALT LAKE CITY — A man and woman suspected of being involved in a drive-by shooting on I-15 were taken into custody Sunday.

Feuu Taliaoa Fagatele, 32, and Brittany Maxine Goldsmith, 25, were booked into the Salt Lake County jail on charges unrelated to the shooting after West Jordan police detained them, said Lt. Jared Garcia of the state Bureau of Investigations.

A semi-truck driver told Utah Highway Patrol troopers Saturday that two or three men in a green Ford SUV shot a single round at this vehicle, striking the door. The truck driver was not injured.

The semi-truck driver told the UHP that he was unaware of anything that would have precipitated the incident, which happened just before noon.

Investigators have also identified a third person of interest, Garcia said. The shooting was not random and might be connected to drugs or a "relationship issue," he said.

Fagatele was booked into jail on charges of possession of dangerous weapon by a restricted person, vehicle burglary, assault on police officer, possession of drug paraphernalia, false information and failure to stop, according to jail records.

Goldsmith was booked on suspicion of possession of a weapon by a restricted person, possession of drug paraphernalia, intent to distribute drugs and retail theft, jail records show. 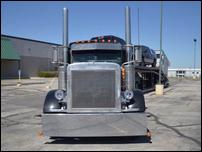 UHP investigating drive-by shooting along I-15; No injuries reported

The Utah Highway Patrol was investigating Saturday afternoon a drive-by shooting in the southbound lane of I-15 around 3300 South.
×