LONG BEACH, Calif. — In a game it never led after going on a 10-2 spurt to start the game, BYU shot 41 percent from the field and 24 percent from 3-point range.

The Cougars still had a chance to win it until Nick Faust forced the 24th turnover in the final seconds to give Long Beach State a 66-65 home win in a game that finished at 2 a.m. MST Tuesday during ESPN's Tip-Off Marathon.

"The kids fought really hard and battled, but we just were not very good tonight," BYU coach Dave Rose told KSL NewsRadio. "The difference was we turned the ball over 24 times and missed 14 free throws. In a one-point game, that's a lot to overcome just to get it to a one-point game."

Indeed, BYU (1-1) had a chance to win at the end — namely because Long Beach State (2-0) shot just 31 percent from the floor and 29 percent from 3-point range. But the 49ers doubled up BYU's free-throw shooting percentage and scored 23 points off turnovers to survive for the upset win.

While the shooting was ice-cold from the floor, BYU's post game proved itself well on the offensive end. Corbin Kaufusi had a career-high 17 points, 10 rebounds and three blocks with only two fouls, and Jamal Aytes added eight points and three rebounds off the bench in his first official action of his BYU career. Jordan Chatman also came off the bench to score eight points.

But Kaufusi couldn't focus on his individual achievement amid the first loss in BYU's first road trip of the season.

"It's never easy to lose," Kaufusi said. "Everybody knows that we had a lot of opportunities, and it's too bad we weren't able to capitalize when we had those opportunities."

Turnovers were the key. Long Beach State turned the ball over just 11 times — a paltry sum compared to the Cougars, who also got just 18 points off the bench and two from starting shooting guard Chase Fischer.

Fischer, who had a game-high 20 points last Friday against Utah Valley, fouled out with about 90 seconds left in the game, a victim of a new interpretation of charging violations and hand-check rules that BYU still hasn't figured out.

Losing one of just three seniors on the roster to foul trouble proved to be too much for the Cougars to overcome.

"We were really fortunate that we had a chance down the stretch to win it," Rose said. "But we were not very good executing offensively down the stretch — and (Long Beach State) made some super plays, too.

"Give them credit; they made the plays to win the game. We really have a lot of work to do. We have to find out how this team is going to finish games." 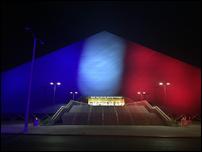 Branford Jones had a go-ahead 3-point play with 3:57 left and Long Beach State deflected two BYU inbound passes in the final 4 seconds to secure a 66-65 victory over the Cougars on Tuesday morning.

Kyle Collinsworth had a quiet double-double with 12 points and 12 rebounds, but he sat out most of the first half with foul trouble. The senior from Provo High, who already owns the NCAA record for most triple-doubles in a career, made just 4-of-9 from the charity stripe — highlighting one of BYU's biggest deficiencies overall.

"I think one thing coach said in the locker room (that stood out) is just work," Kaufusi said. "We have a lot of work to do: free-throw shooting, and how we can be strong with the ball so that those things don't happen again."

BYU returns home Friday night against Division II Adams State, which plays at Utah State Tuesday. The Cougars have five of the next eight games at home, and seven of them in the state of Utah.

There are plenty of phases to improve — Rose called BYU's play in transition "a train wreck" — but also areas to highlight, such as rebounding, where BYU outgrabbed Long Beach State 54-42 in the early hours of Tuesday morning.

That'll take more hours on the practice floor — something the Cougars haven't had as much as they'd like after preseason injuries to Collinsworth, Fischer and Aytes, among others.

"I've always loved this team for its resilience when we have losses like this. It's real easy for some teams to take their separate paths and let that ruin the season," Kaufusi said. "But we're really good at sticking together, and doing what we need to do for the team."