SALT LAKE CITY — With eight weeks gone in a 13-week season, it's time to take stock of the playoff race for our KSL.com fantasy football league.

Since our initial update a few weeks ago, the makings of the postseason picture have taken shape. We've got two division leaders rolling along toward the top seeds, a group in the middle fighting for the remaining two spots and a few bottom-feeders all but out of contention. Let's take a look.

Robert Jackson (Team Jackson): The league's top team both by record (in a tie) and total points scored (outright), RoJack has put up nearly 105 points per week on the way to a 6-2 record. Powered for most of the year by runaway top overall back Devonta Freeman (a guy who'll show up on a high percentage of first-place rosters given his dominance compared to his peers), Robert is only getting stronger — the return of quarterback Ben Roethlisberger from injury and the promotion of Steelers' running back DeAngelo Williams with fellow back LeVeon Bell sidelined for the year are both big boosts.

RoJack's depth is a bit questionable, but this late into the year that's less vital. His starters are bolstered by top overall tight end Rob Gronkowski, top-five running back Chris Ivory and a consistent Rams defense. He's among the favorites as we approach the playoffs.

Nathan Harker (Victorious Secret): Nathan is riding Tom Brady, top overall fantasy player on the year, by a wide margin. Brady sets a high baseline every week, and a collection of solid talent otherwise backs him up. Nathan's wide receiver position has been strong all season — despite a trade with yours truly a couple weeks ago, sending two starter-level wideouts away, he still has names like Odell Beckham Jr., Mike Evans, John Brown and Brandin Cooks. He leads his division by two full games, plus a points advantage, and should enter the playoffs as the second seed at worst.

Josh Furlong (Team Furlong): Josh sits in pole position among three teams grouped at 4-4, fighting for the two remaining playoff spots assuming neither division leader falters. Josh has the most points scored of the 4-4 teams, which currently gives him the tiebreaker over the other two.

A close win from Josh over yours truly may have ended my chances this past week. He has a few injury issues to his running backs, though — both Matt Forte and Carlos Hyde could miss multiple weeks, and Josh will have to rely exclusively on Frank Gore and Isaiah Crowell to get him through those.

Andy Larsen (Lucky Skittles): Andy is only 18 points behind Josh on the year, but holds a big 54-point advantage on Jeremiah Jensen, our other 4-4 squad. Andy has made up for the lackluster performance of top-five pick Marshawn Lynch with the presence of budding superstar Todd Gurley, at this point the most reliable back in the game. He's got wide receiver Alshon Jeffery and tight end Antonio Gates getting healthy at just the right time, and if quarterback Andrew Luck can overcome a season of maladies and play up to his standards, Andy's crew could be a dark horse come playoff time. 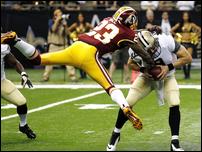 With three weeks of fantasy football in the books, we're just under a quarter of the way through the regular season. Contenders have begun to separate from pretenders, and the early makings of the playoff picture are beginning to take form. (Photo: KSL)

Jeremiah Jensen (Dez Nuts): To be perfectly honest, Jeremiah has been pretty lucky. Being outscored by 108 points over eight weeks but still managing a 4-4 record is no easy feat. JJ's backs are very thin beyond Doug Martin, and he's being carried by a QB tandem of Aaron Rodgers and Cam Newton. All that said, though, he's still in contention — a matchup with Andy this week has the potential to vault him into a playoff spot with a win, and he'll face Josh once more on the year as well.

So you're saying there's a chance

Sean Walker (Out with a Broken Jawbone): On the flip side of Jeremiah luck-wise, Sean has felt the karma of not drafting his own team in the form of a league-high 832 points against on the year. In reality he's far from out of it at 3-5 — 787 points for is better than any of the 4-4 teams ahead of him, meaning he'll have an advantage if he can even the records up. He'll be relying on studs Julio Jones, Adrian Peterson, Mark Ingram, DeAndrre Hopkins and Philip Rivers to continue carrying what's been the league's most top-heavy team all year.

Ben Dowsett (Easy Now, Don't Forsett): Week 8 was a pivotal one for my squad, and I came up short with a loss to Josh that dropped me to 3-5 with a significant points disadvantage on those above me. In reality, I have nothing to complain about; under 90 points a week simply won't cut it in an eight-team league. I tried to shake things up by acquiring Jarvis Landry and Allen Robinson from Nathan, and while both have been fine, they haven't been enough to take me over the top. I'll need to go a minimum of 3-2 over the final five games, and likely 4-1, to have a shot at the playoffs.

Greg Wrubell (Scary Moment): Bringing up the rear is Greg's group, though he's actually scored six more points than Jeremiah on the season. Greg is the only owner for whom the playoffs seem nearly impossible, with a 2-6 record placing him two full games (plus points) behind with several teams to navigate past. His roster has been remarkably deep all season, but unfortunately he's been unable to parlay that into any top-end studs beyond tight end Gary Barnidge, a real necessity in a league with just eight teams. Greg likely needs to win out to have a chance.