WENDOVER — A bomb squad from the U.S. Air Force checked out unexploded ordnance discovered by a rockhound in the west desert.

Craig Alvord was rock hunting north of Wendover recently when he found an unexploded bomb. He contacted the Air Force, and its bomb squad blew it up on the old test range.

Alvord was hoping for a little more from the greatest discovery he's ever made while rockhounding.

The explosion was impressive, but not the kind the 775th explosive ordnance disposal unit expected had it been a bomb with live explosives inside.

"If we had had a high explosive contribution, the blast would have been much larger than it was. What we saw in reality was just the C4 that we put on it to access it," said Tech Sgt. Wesley Kory with the 775th explosive ordnance disposal unit.

It turned out to be a World War II-era, 500-pound, sand-filled training bomb that was dropped on the old test range decades ago.

What do I do if I find something like this?
If you come across something like this in the wilderness or in the attic or basement when you're clearing out old items, call 911 or the local authorities and they'll get in touch with the bomb squad.
Source: Tech Sgt. Wesley Kory with the 775th explosive ordnance disposal unit

The disposal unit just wanted to get rid of it safely.

"Either make it go away under its own power or to contribute to it. Crack it open, see what's on the inside," said Kory.

They put more than 6 pounds of C4 on it and blew it up.

When Alvord found it, he dug it out and then covered it back up until the Air Force could get to it on Tuesday.

"It's been thrilling. The day I found it I was having a really good day. It's exciting to an old marine, you know?"

The tech sergeant said if you come across something like this in the wilderness or in the attic or basement when you're clearing out old items, call 911 or the local authorities and they'll get in touch with the bomb squad. 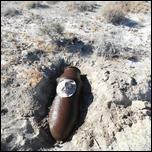 'Once-in-a-lifetime' find could be a WWII bomb, rock hunter says

Craig Alvord has been rock hounding for more than 50 years and recently stumbled across the find of a lifetime.
×