Andy Phillips key for Utes in 2013 win against Utah State

SALT LAKE CITY — For years, the Battle of the Brothers was one-sided.

Between 1998 and 2009, Utah beat Utah State 12 straight times. After a two-year hiatus, the Aggies shocked the Utes in overtime, 27-20. But was that game a fluke or was it the start of a new chapter in one of college football's oldest rivalries?

The two teams would soon find out in a rematch the following season in Rice-Eccles Stadium. The game was the season opener for both teams, with many questions still to be answered for the two programs.

Could the Aggies continue their upward progression with newly appointed head coach Matt Wells? Was this the year that the Utes would turn the corner in the Pac-12 with new co-offensive coordinator Dennis Erickson?

"We expect that they're going to be every bit as good as they were last year," Utah head coach Kyle Whittingham said regarding Utah State the week before the game. "We have a big challenge ahead of us."

"It is going to be a little bit hostile," Utah State quarterback Chuckie Keeton said about looking forward to playing in Rice-Eccles. "I know that for a fact, because we came away with the win last year."

Sophomore quarterback Travis Wilson looked brilliant for the Utes in the opening quarter, guiding touchdown drives on two of the Utes first three possessions to take a 14-3 lead over the Aggies. The offense was rolling on all cylinders, despite losing wide receiver Kenneth Scott to a lower leg injury early in the game.

"I was definitely much more poised in the pocket, and it turned out to be a really great game," Wilson said following the game.

But the Aggies weren't going to go down without a fight. Led by Keeton, the Aggies stormed back, scoring 20 straight points to take a 23-14 lead in the second half.

"We could have folded our tent right there. A lot of teams would have. But our guys kept coming. They kept fighting, kicking, scratching, clawing; finding a way to win the game," Whittingham said. 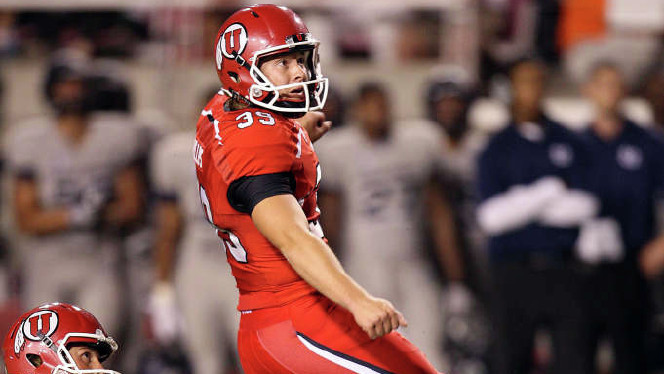 Andy Phillips watches as his field goal is good in the final moments of the game against Utah State (Photo: Ravell Call/Deseret News)

Playing in his first ever football game — at any level — Phillips calmly booted a 45-yard field goal to pull the Utes within 6.

The made field goal set the stage for what turned out to be the defining moment of the game. On the ensuing kickoff, Whittingham and special teams coordinator Jay Hill dialed up an onside kick, which Phillips executed almost to perfection, leading to a Utah recovery.

"Phillips nailed some huge kicks. His onside kick changed the momentum and he was our player of the game," Whittingham added.

The momentum was again with the Utes as running back Karl Williams scored on a 2-yard touchdown run to give Utah a 24-23 lead.

The Aggies retook the lead with a field goal of their own, but Phillips converted two more attempts, the last with just 19 seconds left in the game to give the Utes a small cushion.

"To be honest, it's a little surreal," Phillips said. "I can't believe the game is over and this has actually happened. I didn't realize how big of an impact something like an onside kick or a field goal can make." Robert Jackson is the cross platform sports and weather producer for ksl.com and KSL-TV.