PRICE — Linda Dimick Lindsey wasn't sure she could get through it.

Her voice trembled and she paused just before she spoke the name of the man she shared 19 years with, the man who gave her three daughters and a son and who she pledged "I do" to forever.

That man, Jerry Lee Dimick, went to work one day in a Carbon County mine and never came home. More than two tons of rock stole her first husband from her, and stole their life together.

Lindsey was among the families of fallen miners who read the names of their loved ones at Monday's dedication of the state's first memorial to the men who worked in coal mines and died.

The effort to collect the names, document the deaths and raise the money for the memorial was led by Dennis Ardohain and Frank Markosek, two former coal miners who between them spent more than 80 years underground.

Nearly two years ago, they decided the friends they'd seen perish over the years deserved to be honored, as well as the families they left behind. They led a fundraising effort that secured more than $350,000 to pay for the memorial, which will also include an identical tribute to fallen Emery County miners.

All 1,352 names of the dead from Carbon County mines were read during the daylong tribute in downtown Price that was punctuated with tears and tributes, laughter and longing.

"It was unbearable," Lindsey said, recalling the loss and grief she felt when her husband was killed March 7, 1986.

Lindsey, who has since relocated to Ogden, is a coal miners' daughter who still calls Carbon County home.

"I come from a family of coal miners. It was our life."

They are not just miners, but community builders, even nation builders without whom Utah would not be what it is today. But more importantly, we remember the fathers, sons, brothers, grandfathers, cousins, nephews and neighbors, each with a personal legacy and each with a personal story.

Two of Lindsey's daughters, Michelle and Deedee, sat on the pavement in front of their mother, recording the moment, their own eyes filling with tears as their father's name was read.

Aili Allen's grandfather died at Winter Quarters May 1, 1900 in a dust explosion — one of more than 200 men who perished in what was at the time the nation's worst coal mining disaster.

Allen is 85 now, lives in Michigan, and her mother was only 2-years-old when the explosion happened.

Her grandmother took the family and returned to their native Finland.

She quietly read the name of Josef Andersson Kotka. Then said, "It wasn't quite as bad as I thought."

Allen said she visited Scofield to look for her grandfather's grave in 1989 and again on Sunday, but her search was in vain.

"I know he is there and this today, it is saying goodbye," she said, her eyes beginning to fill with tears.

The events of the day include remarks by Utah Rep. Brad King, D-Price, who said the memorial gives renewed life to the sacrifices made by coal miners.

"They are not just miners, but community builders, even nation builders without whom Utah would not be what it is today," he said. "But more importantly, we remember the fathers, sons, brothers, grandfathers, cousins, nephews and neighbors, each with a personal legacy and each with a personal story."

There is the story of Mike Guzman, a gregarious, charismatic man with an infectious laugh who so loved his vacation in Chicago he went to work on his day off so he could share the adventure with his friends.

Guzman died with four others in a roof fall at the Plateau Mine on Aug. 24, 1979, leaving behind his widow, Flora, and five daughters.

"We were high school sweethearts," the widow said, smiling at his memory. "These men, they so deserve this."

Like Flora Holguin, Hope Robertson came to pay respects to her fallen husband, Bret D. Robertson. She wore a button bearing his picture and read his name proudly. 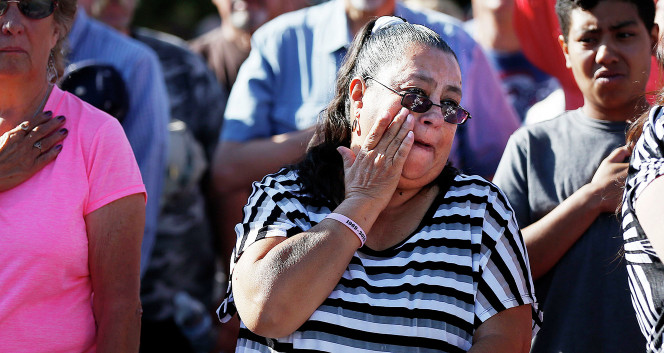 "We are all so close," she said, gesturing to the crowds of people around her. "To have all of this tied together the way it is with this monument is so remarkable."

She said her husband died in 1998 in the Andalex mine in a coal burst after safely getting his crew out.

"Like so many, I think of what he gave up for us and and I am so proud of everything he did. I am so glad we are able to get together today and remember."

David Lauriski, the former U.S. assistant secretary of labor for mine safety and health and a Carbon County native, told the crowd of several thousand that the sacrifice made by the fallen miners is not forgotten.

"Those left behind feel that loss everyday," he said. "The wound is deep and never completely heals."

For Maggie Lopez McFadden, the truth in those words is haunting.

"It's the same pain. The pain does not go away," she said, reacting to seeing the monument unveiled. "I even moved out of state so I didn't have to deal with the memories."

She followed the ambulance to the mortuary, where she watched them wipe the coal dust from her father's face so she could identify him.

"I was a daddy's girl," she said, and later added, "I hesitated coming today because this would be too emotional."

But like so many in the coal mining community, McFadden did the hard thing, what needed to be done.

She got her in car and drove from Kansas to honor the miners.

"This is long overdue."