VATICAN CITY (AP) — The Vatican will shelter two families of refugees who are "fleeing death" from war or hunger, Pope Francis announced Sunday as he called on Catholic parishes, convents and monasteries across Europe to do the same.

Francis cited Mother Teresa, the European-born nun who cared for the poorest in India, in making his appeal in remarks to pilgrims and tourists in St. Peter's Square.

"Faced with the tragedy of tens of thousands of refugees who are fleeing death by war and by hunger, and who are on a path toward a hope for life, the Gospel calls us to be neighbors to the smallest and most abandoned, to give them concrete hope," Francis said.

It's not enough to say "Have courage, hang in there," he added.

"May every parish, every religious community, every monastery, every sanctuary in Europe host a family, starting with my diocese of Rome," Francis said. He also asked bishops throughout Europe to have their dioceses take up his call to "express the Gospel in concrete terms and take in a family of refugees."

The Vatican is a tiny city-state and some of its citizens, including families with children, live in apartments inside its ancient walls. It has two parish churches, including St. Peter's Basilica. 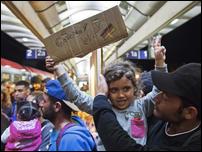 German Chancellor Angela Merkel, reflecting on "a moving, in some parts breathtaking weekend behind us," said Monday that all EU countries should help to accommodate the human tide of Arabs, Asians and Africans seeking refuge from war and poverty.

Francis said two of the Vatican's parishes will welcome two refugee families, but did not give details. A Vatican spokesman, the Rev. Ciro Benedettini, quoted the pope's chief alms-giver as saying the Vatican is now deciding which families will be hosted.

He has chosen mercy as the overarching theme of his papacy. Practicing what he preaches, he has already made free showers at the Vatican available to Rome's homeless and has barbers available for haircuts for the needy, among other initiatives.

Thousands of migrants and refugees, many fleeing war and persecution, have streamed into Germany and Austria over the weekend after being stuck in Hungary for days.

Italy has nearly 120,000 people who were brought to its shores after rescue at sea and who are hoping for asylum in Europe.

An Italian cardinal calculated that the parishes in the predominantly Roman Catholic country could practically host them all.

The Gospel calls us to be neighbors to the smallest and most abandoned, to give them concrete hope.

"I hope this wish comes true," Cardinal Angelo Bagnasco told a Catholic-affairs TV program on TV2000, adding, "It gives the idea of the possibilities that are in our country."

European bishops will discuss soon the pope's appeal for parishes to take in refugees, Bagnasco said.

"Yes, surely there will be a prompt response," Bagnasco said. "We will talk about it next week, when the heads of European bishops conferences meet in Jerusalem" for an annual gathering, the cardinal said.

© 2015 The Associated Press. All rights reserved. This material may not be published, broadcast, rewritten or redistributed.