(CNN) — After people died last week in Wyoming's Yellowstone National Park and New Mexico's White Sands National Monument, some of the millions of vacationers headed to national parks may be concerned about their safety.

But those deaths, apparently the results of a grizzly bear encounter and of 100-degree temperatures, are an anomaly, according to National Park Service statistics.

A total of 1,025 people died in national parks from 2007 to 2013. While the loss of those lives is tragic, it's a minuscule proportion of the nearly 2 billion visitors to national parks in that time span — and exponentially lower than the mortality rate in the general population of the United States: 821.5 deaths per 100,000 population in 2013, according to the Centers for Disease Control and Prevention.

Despite all the wild animals in protected parkland, wildlife only killed six people over those seven years. Grizzly bears killed four people, a mountain goat killed one visitor, and one person died from a snakebite, the NPS reports.

The NPS says 87 visitors died from natural/environmental causes between 2007 and 2013 — including 26 from heat illness. That's a far cry from the 2,000 U.S. residents a year who die from weather-related causes, including some 600 a year from heat exposure, according to the CDC.

The vast majority of deaths in national parks turn out to be from things that could happen anywhere to anyone: drownings, crashes, and slips and falls.

While the statistics suggest you'll be relatively safe in national parks, following park rules and signage and listening to park rangers help contribute to everyone's safety.

Many parks, including Yosemite and Yellowstone, post warnings about active wildlife such as bears both online and in the park and ask visitors to take protective action, such as locking food away in bear-proof boxes, to keep the potentially dangerous animals away from populated areas.

And many parks offer suggestions for safe hiking practices, such as staying on the established trail. White Sands National Monument's newsletter advises hikers to carry 1 gallon of water per person.

So don't be afraid to visit the United States' natural wonders. But be prepared, be careful and be aware of your surroundings. 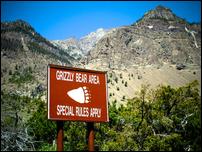