BIG COTTONWOOD CANYON — The smell of spruce still hangs the air near the area in where more than 100 trees were mistakenly cut down, many of which were on private property.

"I wish I could turn back the clock," said Patrick Leary, the executive director of Township Services for Salt Lake County, while standing in front of dozens of jagged tree stumps Thursday.

"No one likes to see these hundreds-of-years-old trees cut down, whether it was accidental or not."

No one likes to see these hundreds-of-years-old trees cut down, whether it was accidental or not.

Silver Hill LLC was in the final steps of obtaining a permit, which would allow the development company's contractor to cut down trees on Forest Service property only. The company wanted to cut a group of about 17 trees to widen a road and clear a path for a sewer line to develop four plots of land.

But the contractor removed about six times more trees than should have been cut down, Leary said.

Property owners began calling the Forest Service on July 16, surprised to discover what looked like the aftermath of a "giant weed whacker" on their lots, said Barbara Cameron, chairwoman of the Big Cottonwood Canyon Council.

Instead, the contractor removed all of the marked trees, even though those were part of a different project.

"Clearly, they overstepped their borders," said Rolen Yoshinaga, the planning and development services director for the Salt Lake County Township Services. "I don't know why, clearly there was some terrible confusion and a mistake made somehow." 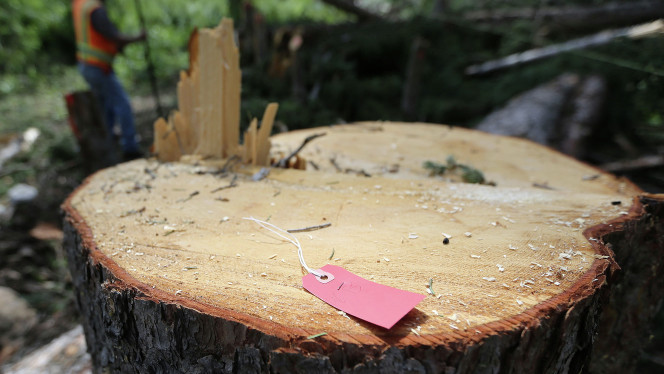 The trees had protected the nearby Silver Creek from mud as the result of erosion.

"That's why the Forest Service planted the trees back in 1905," Cameron said. "It was just all mud up here, and mud was pouring in the creek and polluting the water for Salt Lake City."

After the trees were removed, straw blocks or wattles were placed in the area to help keep the creek clear.

Cameron also estimated that it could take up to a year to replace all the trees.

Leary said more will also be done to alleviate the loss of the trees, but the details of other measures, legal or otherwise, are not yet known, Leary said.

And until the terms of mitigation are final, the development of the road and sewer line have been suspended, he said.

"We can't turn back the clock, so my job is to proceed in everyone's best interest moving forward," he said.