The first man entered the store at 1109 W. 500 South and pointed a black handgun at the store clerk, demanding money and cigarettes, according to West Bountiful police.

The second and third men entered and each stole two cases of beer before leaving. The last man came into the store and talked to the first man and they both left, police said.

The first man is described as Hispanic, between 18 and 25 years old, with short dark hair. He was wearing a white baseball-style hat with the word SOX on the front and a blue or gray bandana covering his face. He had a blue T-shirt with "LA" on the front, long white shorts and black shoes. 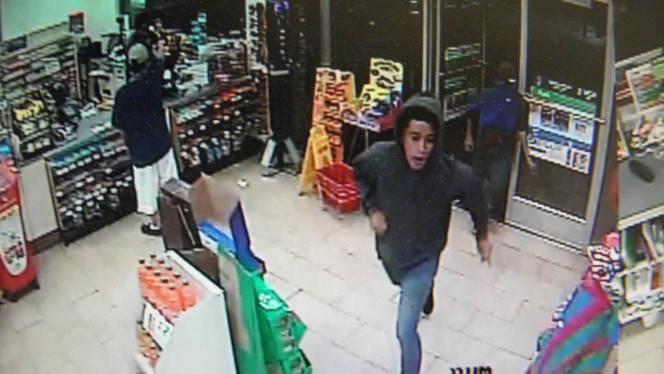 The second male is either Hispanic or Polynesian between 18 and 25 years old with dark hair. He was wearing a gray hooded sweatshirt, blue jeans and dark-colored shorts.

The third man is described as a Hispanic, between 18 and 25 years old, with short dark hair. He was wearing a dark baseball-style cap with a blue T-shirt covering his face, with a dark T-shirt, dark pants and white shoes.

The fourth man is Hispanic or Polynesian and is between 18 and 25 years old with short dark hair. He was wearing a dark bandana, which was covering his face, with a white T-shirt with the Nike swoosh and the words "JUST DO IT" on it, with purple shorts and white shoes.

Police said they may have been driving in a light-colored, four-door car.