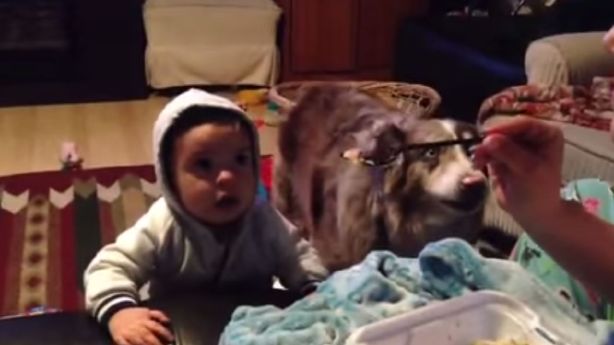 CEDAR HILLS, Utah County — A Cedar Hills family was just trying to get their toddler to say “mama” when their dog chimed in instead.

Like any 9-month-old, Samuel was an excellent babbler, according to his mom, Andrea Diaz-Giovanini.

“That week he had been saying ‘dada’ a lot and so we were trying really hard to coax him to say mama,” she said in an email.

As Diaz-Giovanini’s mother was eating lunch one day, she was trying to encourage Samuel to say “mama” with a bite of her lunch as a reward. The baby didn’t quite get out the word, but their 10-year-old mini Australian shepherd did.

It turns out the dog, Patches, had been trained to say “mama” since he was about 2 years old, according to Diaz-Giovanini, so it’s understandable that he thought Grandma’s lunch was for him if he could say “mama.”

That’s all well and good, but an extra layer to the comedy is baby Samuel's reaction to Patches stealing his mama-saying thunder, which you’ll have to watch and see.

The video cuts with both baby and dog without a little of Grandma’s lunch in their belly, but Diaz-Giovanini said not to worry, Patches got his treat for being a good boy who performed his trick.

The video was posted on America’s Funniest Video’s YouTube channel in February after the family sent it in, but it has gone viral in the last couple of days with over 2.5 million views. Diaz-Giovanini said AFV has contacted them about possibly being on the TV show this fall, but those plans have not yet been solidified.

The family also made a video of now 16-month-old Samuel saying an adorable “thank you” to everyone for helping his video go viral.