FORT COLLINS, Colo. — Imagine something in the night sky that looks like a gigantic, glowing jellyfish many times the size of Mount Everest.

Believe it or not, such things are actually quite common — they're called "sprites" — but until 1989, no one had proof they existed.

"They're beautiful; they're unpredictable," said Walt Lyons, probably the world's premier sprite hunter. He's seen plenty of sprites — from his own balcony.

"The most typical reaction to somebody who saw a sprite is, 'What the heck was that?'" said Lyons, a former president of the American Meteorological Society.

For those who want to go hunting for sprites, there's no better place than the western Great Plains and the foothills of the Front Range near Denver. With the right camera, a sprite hunter looking out over the Great Plains — over the tops of thunderstorms hundreds of miles away — has a good chance of catching a fleeting image of a sprite.

From his home in Fort Collins, Lyons has photographed them as far away as Texas and Canada.

Sprites are among the strangest, most striking and least known atmospheric phenomena. Essentially they are gigantic electrical sparks that dance between the tops of thunderstorms and the edge of space.

"Sprites are interesting in that they're sort of like snowflakes," Lyons said as he examined a slow-motion video of a colorful red burst that was about 20 miles wide. "No two look alike."

Lyons helped find what he calls "a whole menagerie of electrical phenomena" to which he and his colleagues have assigned colorful names. "Yes, elves," Lyons said, "and we also have gnomes and pixies. And since my wife is a Norwegian, we have another phenomenon we call trolls. When we got (images of) the tall skinny ones, we decided to call them 'diet sprites.' I mean, there's no reason you can't have a little bit of fun with science." 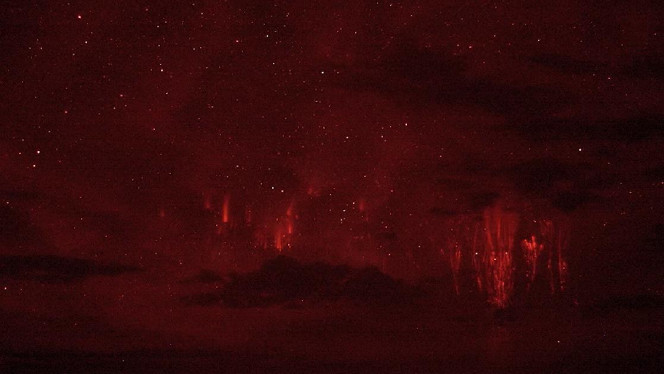 If, like most people, you're learning about sprites for the first time, you undoubtedly have many questions, including: How big are they?

"These sparks are pretty big," Lyons said. "They can be — from the top to the bottom — 30 miles. And maybe 10 or 20 miles across. So in that volume, you can stuff a lot of Mount Everests in. I mean, these are monstrous."

But if they're so big, why was the phenomenon unknown for so long?

"If you blink, you'll miss it," Lyons said, explaining that a typical sprite only exists for a 20th of a second or so. "It's so fast and it's so dim. You know you saw something, but your head can't get around what it was."

As far back as the 1800s, there were occasional eyewitness reports of something strange above thunderstorms. But science didn't take sprites seriously until 1989 when a researcher in Minnesota captured the first video.

If you blink, you'll miss it. It's so fast and it's so dim. You know you saw something, but your head can't get around what it was.

"That was the smoking gun," Lyons said, portraying the reaction of scientists to that discovery. "Aha! Now we have a picture. Now we can begin to study it scientifically."

Over the past 25 years, networks of scientists and amateurs have captured a vast library of images. Lyons himself has shot 15,000 sprites, using a light-sensitive camera to slow down or freeze the dim, fleeting phenomenon. It's now much better understood. It's a release of electricity above the storm, triggered by a traditional lightning bolt down below.

"People used to say this was upward lightning," Lyons explained. "That's really not the correct term at all because it does not come up from the cloud top. It actually starts as a spark around 50 miles up in the atmosphere and goes in both directions, both down and up."

With modern cameras, almost anyone can shoot a sprite. Lucky observers might even see — with their naked eye — one of nature's biggest phenomena.

"If you know they're there, and you know how to look for them," Lyons said, "you can see them. But it's tricky."