Herbert denied veto power over Title I funds by School Board

5PM: Herbert denied veto power over Title I funds by School Board

SALT LAKE CITY — Members of the State Board of Education voted Friday not to support a proposal to give the governor the ability to veto or sign off on Title I funding plans and waivers from federal education laws.

With the Elementary and Secondary Education Act currently before Congress for reauthorization, leaders of several states see it as an opportunty to make statutory changes to federal oversight and state governance over education.

One such change is backed by the National Conference of State Legislatures and the National Governors Association, where Gov. Gary Herbert will become chairman next month. Tami Pyfer, Herbert's education adviser, said the proposal would require Congress to recognize governors as "key partners" with state school boards in education policy.

"We just feel that if we want to continue to improve outcomes, then we want to, as the governor put it, unite and focus," Pyfer said. "We're talking about improving outcomes for students, and we're talking about a window of opportunity to … change language in federal law to give states more control. It's hard to pass up that window."

Currently, the State School Board requests waivers from federal education law independent of the governor, including Utah's ongoing waiver from provisions of No Child Left Behind. Under current statute, the governor could veto a state Title I plan if it required a match in state funds, but the Legislature has the ability to override the veto.

The proposal by the National Governors Association would give the governor the final say in both cases. 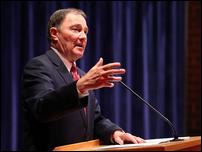 State and education leaders have already begun the process of developing a comprehensive 10-year education plan for Utah, but as the number of projected students continues to grow, so does state leaders' urgency to finish the plan that aims for the success of all students. (Photo: Kristin Murphy/Deseret News)

"It's not the governor or the Legislature trying to power grab to diminish your role," Bramble told members of the State School Board. "What we're trying to do, in a nutshell, is we're trying to strengthen the voice of the state when we're dealing with the federal bureaucracy."

State leaders asked Brad Smith, state superintendent of public instruction, to sign a letter in favor of the changes, but State School Board members were split on the issue. Some said it would usurp the board's prerogative on key issues, while others said it would bring needed collaboration improvements between the board and state leadership.

Eight votes were needed to effect the board's official support, but the measure failed in a 7-7 vote.

David Thomas, vice chairman of the board, said he sees the proposal as contradictory to the state constitution and that it creates an artificial impression of cooperation between the board and the governor.

"We want a great relationship with the Legislature and the governor, and we're trying to forge that," Thomas said. "This allows an additional check on our constitutional powers without going through the normal process, without allowing Utahns to vote on it, and we're now asking the federal government to step in and fundamentally change our governance. I'm uncomfortable with that."

Board member Leslie Castle said the measure would create a "lack of boundaries" in education governance, where the governor is already heavily involved.

"Can't we just have the governor as a supporter of education and the State Board of Education, which I think he has been, but maintain these boundaries that Americans value?" Castle said. "Isn't he a partner in education now? Isn't he our supporter now?"

Board member Jefferson Moss, who voted in favor of supporting the initiative, said the changes would allow the board to focus more on student performance instead of having to deal with waivers from No Child Left Behind until the federal law's reauthorization.

"I felt like that was not really a position the board should be stuck with. We're trying to make a decision that has massive funding implications … and really more of a federalism issue, and yet our focus really should be on how do we improve education outcomes," Moss said. "Where I can see some benefit is this puts the governor more on the line in saying, 'This is where I stand; this is where I don't stand.'"

Pyfer said it was unclear whether Herbert will still send the letter in support of the amendments without the signature of the state superintendent, noting that the reauthorization of the Elementary and Secondary Education Act is a moving target.