GLEN CANYON — The day was sunny after a short morning storm on June 6 when Nick Woolley and two friends set out to hike to the top of Iceberg Canyon.

They knew a big storm was likely headed their way in the afternoon, but Woolley was confident they could finish their hike before the sign of any trouble and meet his wife and three dogs back at camp.

But the hike took longer than expected, and things didn’t go exactly as planned.

“We got up there and then as we started heading back we noticed a big black storm on the horizon and we started just hiking as fast as we could,” Woolley said. “It started raining a little bit on our way down. We got down to the lake, got in our kayak and paddled the rest of the way to camp, which was probably 300 yards from the lake.”

Woolley said the “storm hit just as we kind of got there,” where his wife told him she was hearing all sorts of “crazy stuff happening in the area, so we just kind of hunkered down.”

That’s when the tell-tale signs of flash flooding started.

“We saw the usual waterfalls were spouting off all around, but then we noticed that the actual lake started flowing and filling with debris,” Woolley said. “The next thing we know the rain stopped and the flash flood came, which actually pushed probably 300, 350 yards into the lake, turning it into a torrent full of hail, packed full of ice.”

Woolley, a self-employed photographer and Web developer, caught the unusual and intense 45 minutes of flooding with video and pictures. The video shows massive sheets or churning hail and large debris in the river, as well as the water eroding away chunks from the beach as the water came closer to their camp.

“I couldn’t believe how intense it was getting,” Woolley said. “You can hear it in the video, the sound of the hail, it just seemed like a river of ball bearings almost. It was almost viscous, it was so full of ice.”

According to a meter on their boat, the temperature of the water went from about 74 degrees to 34 degrees when the flood of hail came through. 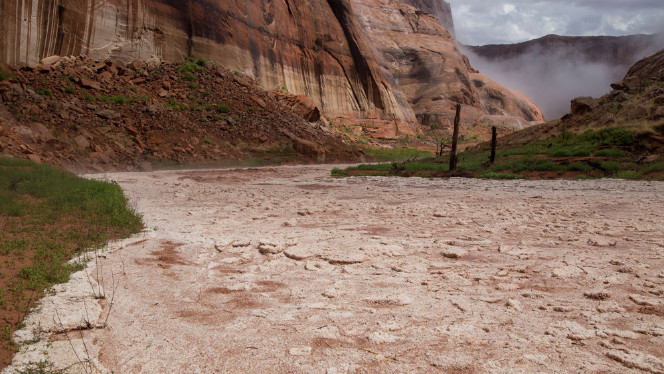 The water came within a few feet of one of the tents, but the group decided there was nothing they could do but watch and wait it out and retreat to higher ground without their gear if necessary. But Woolley said the group was lucky through the preparation and planning of their campsite as well as through the whims of Mother Nature.

When the group first set up camp, Woolley said they chose their spot carefully so as not to be near any dry falls or at the top of a canyon, potentially dangerous places to be when there’s a chance of flash flooding. Additionally, they pitched their tents about 300 yards away from the edge of the lake.

“If we had been right across from where we were at on the other beach, our boat would’ve gotten probably destroyed by it all,” Woolley said.

Woolley said the buildup of ice from the hail was “wall-to-wall with a field of ice that was probably 10, 12 inches thick and hundreds of feet” across.

“All of the ice built up so thick that we couldn't get out of the canyon until the next day. Totally unreal experience,” Woolley said. “I was in Iceberg Canyon of all places — highly ironic.”

The group came out of the storm unscathed both in person and property, and they came out with a new respect for the dangers and unpredictability of flash flooding.

“It was quite the wild experience to see it all and be safe through it. Definitely close to not being safe, but safe,” he said.