(CNN) — An officer's body cam video shows what the ACLU alleges was a wrongful arrest and the wrestling to the ground of an eight months pregnant black woman after she got into an argument with a white woman outside a school in Barstow, California.

"I'd say it's pretty horrifying because the parent is dropping off her second-grade daughter (and) got into altercation with another parent," Jessica Price, an attorney for the American Civil Liberties Union of Southern California, said of the video, posted online by the group. The women were upset with each over a driving dispute.

"A lot of people are going to look at this and going to say there is some level of racial profiling and bias going on here," Price said.

The city of Barstow, however, said police acted properly in the January arrest of Charlena Michelle Cooks of Barstow, though a charge of resisting arrest against her was dropped.

"It is apparent that Ms. Cook actively resisted arrest," the city statement said.

The city also disputed the ACLU's racial characterization of the incident.

Barstow police said they are conducting an internal review.

"Once the department was made aware of the incident, we initiated an internal investigation, and it is ongoing at this time," Lt. Mike Hunter said Thursday.

That police investigation started on Tuesday, five days after the ACLU posted the video online and issued a news release about the incident and that of another arrest of two brothers who, like Cooks, declined to identify themselves to police.

The city agreed to end "stop and identify" arrests and paid a $30,000 settlement to the brothers after an ACLU complaint, according to the civil liberties group and the two brothers. 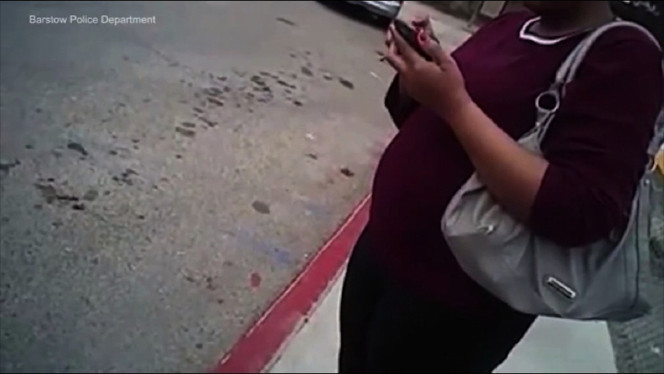 The video shows separate statements by the two women to police, and each accused the other of being threatening in a dispute about how each was driving in a parking lot. The women provide dramatically different accounts to the police officer.

"I was in unbelievable pain," said Cooks, who moved to Barstow in July. "I felt they killed my baby already.

"I work so hard to provide for my family. This is not an issue I wanted. I was just dropping my child off at school for the day," said Cooks, a retail clerk.

Cooks was dropping off her second-grader at the time. Cooks' pregnancy resulted in the birth on March 30 of a full-term girl, Olive, two months after the police incident. The baby is healthy, the mom said.

Cooks' attorney, Caree Harper, described the video as "another outrageous beating of yet another undeserving citizen in this country."

At issue was how Cooks declined to identify herself fully to police in Barstow, a Mojave Desert community that's 115 miles northeast of downtown Los Angeles.

After Cooks gave only the name of "Michelle" and nothing more, two police officers began arresting her and wrestled her to the ground despite her protests and admonitions that she was pregnant and had just dropped her child off at the school, the video shows.

In fact, the ACLU says, Cooks was correct in telling police that she didn't have to identify herself, under California law and the Fourth Amendment.

"Cooks should not have been arrested for failure to identify herself," an ACLU statement said. "A person who is not suspected of a crime has no obligation to identify herself. Even if an officer is conducting an investigation, in California (unlike some other states), he can't just require a person to provide ID for no reason. The officer can ask for ID, but the person can say no.

"In California, as long as the request for ID is not reasonably related to the scope of the stop, you have the right to refuse to show your ID to law enforcement except in the following cases: If you're driving and pulled over, you need to show ID (and) if you have been arrested or booked, show your ID," the ACLU said.

The ACLU posted the video in connection with a news release about the settlement with Barstow and its Police Department in the case involving the arrest of two brothers.

"We feel it's a very important teaching tool on what not to do on the police officer's part," Price said of the video.

The ACLU is not representing Cooks in any action against the city or its police, Price said. 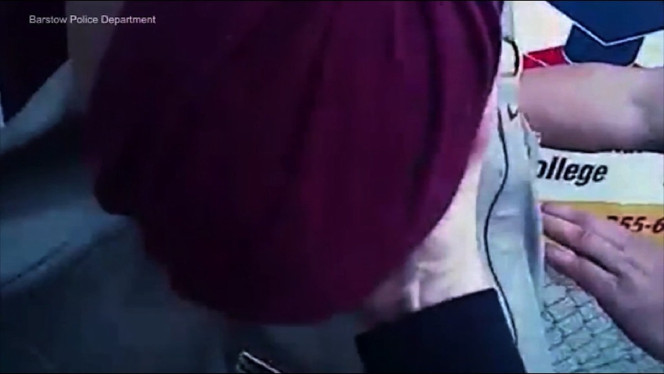 What happens in the video

In the video, the officer approaches a woman, who is white, outside a school. She indicates she earlier called them.

The woman states, "I work here," and tells police she got into an argument with another woman about a near collision in the parking lot and accused the woman of punching her window and throwing something. She also accused the other woman of driving recklessly fast.

"She scared ... me, and I'm like, I'm calling the police," the woman says, accusing the other woman of screaming and acting "all crazy."

The woman isn't identified in the video, and police declined to comment Thursday.

The officer tells her: "I don't see any crime. I'm going to document her name, probably her story, and I'm pretty sure she's going to (provide) a story where it's your fault and this and that."

The white woman isn't identified in the video. She wasn't charged by police, the ACLU's Price said.

The officer then approaches Cooks, who is standing on the sidewalk.

Cooks tells police that she was dropping off her daughter and then she got into an argument with the other woman about whether the driveway was one way.

Officer: "I actually do have the right to ask you for your name in this case, OK."

Cooks makes a phone call, and while she does, she tells the officer her name is Michelle. Cooks often goes by her middle name, she said.

Officer: "Ma'am, I'm going to give you two minutes."
But the argument between the officer and Cooks escalates. The officer grabs Cooks, and a second officer joins him.

Cooks begins to shout and scream.Cooks: "Don't touch me, don't touch me! ... I'm pregnant, do not touch me!" The two officers pin her against a chain-link fence, and the pregnant Cooks lands on the ground, on her stomach.Officer: "Why are you resisting?" Cooks: "Please stop this!" The officers handcuff her as she faces the ground.Officer: "OK, get up, ma'am." Cooks: "I can't because I'm pregnant! ... Please don't touch me!" The officers struggle to lift Cooks from the ground.Cooks: "Stop it! Let my arm go! This is ridiculous. What are you doing?" Officer: "OK, you're under arrest," and the officer walks her while she is handcuffed to the squad car.

Cooks weeps, telling police she doesn't want to get into the squad car.

The ACLU said the officers risked Cooks' pregnancy by handcuffing her behind her back.

"She ended up on the ground and on her belly. She couldn't use her hands to break her fall, and she was unable to pick herself up afterwards," the group said. "The ACLU has long advocated restricting the use of restraints on pregnant women. It's a terrible idea to handcuff a pregnant woman behind her back. This video shows why." 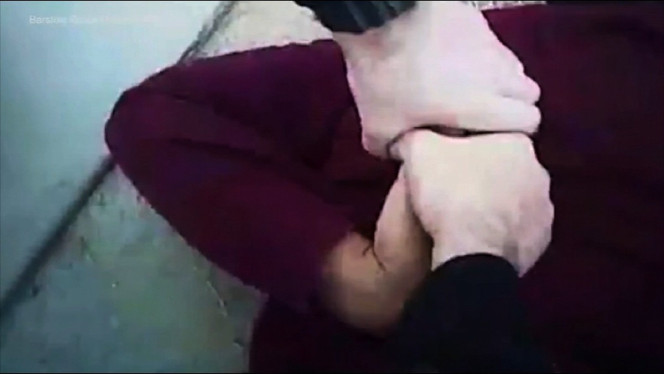 The police encounter with Cooks came at a time when the ACLU and the city of Barstow were negotiating a settlement involving the arrest of the two brothers who declined to identify themselves at a taco shop last year, the ACLU said.

Jesse and Robert Katz, then 34 and 23, were approached by police in January 2014 when a restaurant customer and others accused them of stealing a vaporizer, the ACLU said. The customer called police but had no evidence, the ACLU said.

The Cooks incident happened one day before the ACLU and the city of Barstow reached a settlement in the Katz case, Price said.

As part of the settlement, Barstow police agreed to train their officers on how they may not arrest someone solely for refusing to show identification, Price said.

The brothers, of Morgan Hill, California, were each charged with resisting arrest, but those charges were later dropped, according to postings by the brothers on their manufacturing design website.

The city statement acknowledged Thursday that "the Katz brothers were arrested for delaying and obstructing an officer's duties."

But all charges were dropped, the city said.

"As a result, a claim was filed against the city. Subsequently a settlement was reached between the city of Barstow and the Katz brothers in respect to this matter," the city statement said.

The ACLU is supporting legislation in California that would require police to disclose racial profiling data collection.

"We know how many shark attacks that happened every year, but we do not know how many police racial profiling incidents that happen each year. We're not studying whether police departments have racial disparities in their interactions," Price said.