HYRUM — A guard station built in 1934 in the Uinta-Wasatch-Cache National Forest has been rehabilitated and an open house will be held Friday to teach the public about the history of the building.

The Blacksmith Fork Guard Station was built by the Civilian Conservation Corps as part of President Franklin D. Roosevelt’s New Deal Program “aimed at creating jobs for young men as a means to recover from the Great Depression,” according to Uinta-Wasatch-Cache National Forest public affairs specialist Kathy Jo Pollock.

“The Civilian Conservation Corps was a work relief,” Pollock said.

Guard stations were built for the Forest Service rangers to live in and work out of, Pollock said. Often, the families of the Forest Service rangers also lived there with them. The early guard stations were typically spaced “a day’s ride by horseback” from each other and there are several still located in the Logan Ranger District. Located in Logan Canyon, Card Guard Station and Tony Grove Guard Station are also being renovated for public use.

Located about 11 miles from Hyrum, the guard station area provides a variety of recreational activities, including hiking, biking, horseback riding and OHV trails. The cabin may be available for public use by the end of the summer and can accommodate five to six people, Pollock said. It also has rooms for tents adjacent to the building. 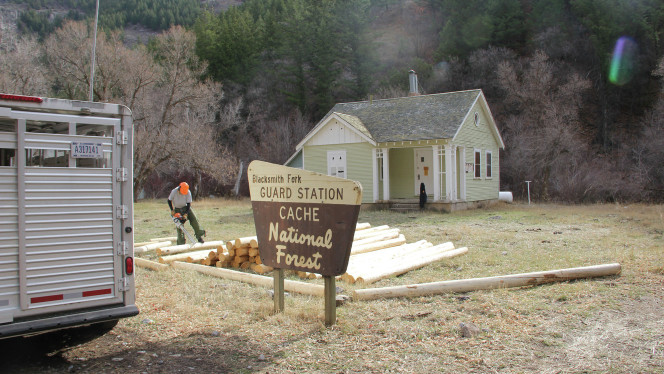 Then turn left onto the Left Hand Fork Canyon Road FS-245 and travel approximately 3 miles on an improved gravel road. The guard station will be on the right (south) side of the road.