SALT LAKE CITY — Those in charge of measuring Utah's snowpack are already practically twiddling their thumbs, with 70 percent of snow measurement sites across the state barren and a measly runoff predicted.

The bleak outlook detailed in the May report released Wednesday by the U.S. Department of Agriculture's Natural Resources Conservation Service in Utah warns users who rely on reservoir storage to expect short supplies. For those who rely on direct stream flows, the situation is even more drastic, with outright shortages anticipated.

"As an example, the Weber River has lost about 75 percent of its snowpack to date and has produced a paltry 8.5 percent of its normal April-July stream flow," the report said. "The story is the same across the state. … We can only hope the remaining portion of snow produces a bit more runoff but the prospect is pretty bleak."

The report notes that in low snow years, the melt out occurs on an accelerated schedule — anywhere from two to four weeks — and generates lower peak stream flows. This year's stream flows are anticipated to be 20 percent to 40 percent of average, with many lower elevation watersheds that are already devoid of snow.

Another month concluded in April with below-average precipitation, and year-to-date accumulations are at about 65 percent of average, according to the report.

We can only hope the remaining portion of snow produces a bit more runoff but the prospect is pretty bleak.

At 46 of Utah's key reservoirs, capacity is at 65 percent, 2 percent less than it was this time last year.

While it is not atypical for snowpack to start to decline by May 1, the numbers in regions for 2015 are particularly abysmal: Bear, 33 percent of average; Weber, 19 percent; Provo, 16 percent; Duchesne, 31 percent; Price, 13 percent; southeast Utah, 0 percent; San Pitch, 17 percent; and southwest Utah, 38 percent.

The statewide figure is 23 percent of average, compared to 83 percent this time last year, the report notes.

"Given current conditions, most watersheds will melt out by mid-May."

In the Tooele and Vernon Creek basins, the snowpack is already gone and sitting at zero percent of normal, compared to 75 percent last year.

There are also striking contrasts in the Bear River region at the extreme northern end of the state, which had a snowpack that sat at 119 percent of average last year and now lingers at just 33 percent of where it typically is. 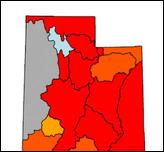 The dire news comes the same week that top Bureau of Land Management officials are in Utah to get an up close look at drought conditions. Director Neil Kornze and his deputy, Steve Ellis, are visiting Utah, Idaho and Nevada, where drought conditions persist in 99 percent of the geographic area.

The USDA's Forest Service Chief Tom Tidwell testified Tuesday before the Senate Energy and Natural Resources Committee that the 2015 wildfire season will be above average and strap financial resources, possibly eclipsing costs of $1.3 billion.

Just last week, the U.S. Department of Interior announced $4 million in funding to bolster rangeland health and help reduce the threat of wildfire in the Great Basin region, including Utah.

As cities prepare for the dry months to come, some are already implementing fairly drastic restrictions, including Lehi where outdoor water toys have been prohibited and a strict water schedule was implemented.

The Weber Basin Water Conservancy District, which sits at just one year of storage, is already pumping water out of Willard Bay and releasing water from its reservoirs.

This is so unusual, we never release out of storage this early.

"This is so unusual, we never release out of storage this early," said Scott Paxman, assistant general manager.

Paxman added that the district's board members are also taking the unusual step of holding an emergency teleconference next week to discuss what sort of seasonal restrictions or reductions may be instituted.

"We normally wait until late in May or June to see what the runoff is going to do, but we already know," he said.

Last year, late summer rains helped nurse reservoir storage through the fall, with fewer draw-downs on the water that remained in the Weber system. Although it was dry for the first half of the irrigation season, Paxman said the district was able to avoid reductions in water allotments.