NASA's Greased Lightning is half helicopter, half plane

HAMPTON, Virginia — The Greased Lightning John Travolta sang about was a car, but NASA’s vehicle of the same name is something else entirely: a helicopter-plane hybrid.

The 10-engine, remote-controlled Greased Lightning, also called GL-10, demonstrated its ability to take off like a helicopter and fly like a plane during tests at NASA’s Langley Research Center. Designing such a vehicle proved to be a tricky feat, but researchers say it has the potential to be more efficient than traditional aircraft.

"We have a couple of options that this concept could be good for," aerospace engineer Bill Fredericks said in a statement. "It could be used for small package delivery or vertical take off and landing, long-endurance surveillance for agriculture, mapping and other applications. A scaled up version — much larger than what we are testing now — would also make a great one- to four-person size personal air vehicle."

CNET called the GL-10 prototype “truly the most awesome remote-controlled plane ever.” It has a 10-foot wingspan, weighs 62 pounds and is battery-powered, according to NASA. Eight of the electric motors are on the wings, while two are on the tail.

"During the flight tests, we successfully transitioned from hover to wing-borne flight like a conventional airplane then back to hover again. So far, we have done this on five flights," Fredericks said. "We were ecstatic. Now we're working on our second goal: to demonstrate that this concept is four times more aerodynamically efficient in cruise than a helicopter."

The GL-10 is being showcased at the 2015 Association for Unmanned Vehicle Systems International conference in Atlanta through Thursday. 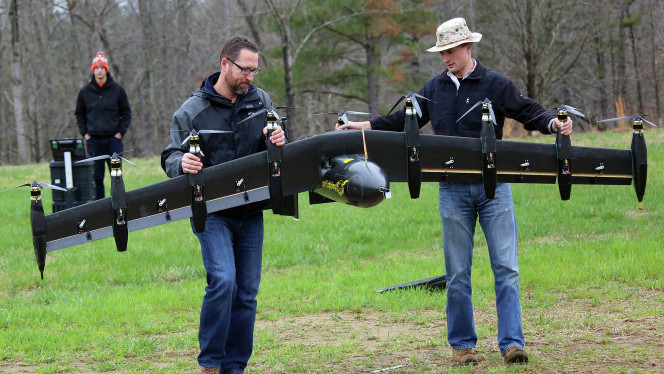