Man to stand trial in shooting death of Sandy woman

SALT LAKE CITY — A Sandy man accused of shooting and killing a woman as she fled his home following an alleged dispute over drugs and money has been ordered to stand trial.

Larry Kent Graff, 52, pleaded not guilty in 3rd District Court on Monday to charges of murder and attempted murder, both first-degree felonies, and was ordered to stand trial later this year. Graff is accused of shooting 26-year-old Candice Melo on Dec. 18 as she ran down the driveway of his home, 343 E. Gary Ave. (9560 South).

"Yeah, I did it, I shot her," Graff allegedly told officers as they approached, according to charging documents.

Graff is also accused of firing shots at Melo's boyfriend, who escaped injury by falling to the ground and pretending to be shot.

The shooting followed reports of an argument and physical struggle in the home, where Melo, her boyfriend and another man allegedly tried to take money, drugs, cell phones and computers from Graff, according to a search warrant. 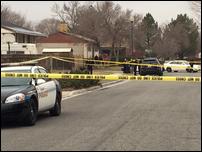 Police: Sandy man admitted, 'I did it, I shot her'

A man accused of shooting and killing a woman outside a Sandy home and then firing a shot at a second person was charged Tuesday with murder.

Drug charges said to be pending at the time of Graff's arrest have not been filed.

A five-day jury trial for Graff is set to begin August 10, with a final pretrial conference scheduled in July.