(Courtesy of the Flaming Gorge Chamber)

The 2015 Burbot Bash was scheduled to start Jan. 23 and run through Jan. 25 at Flaming Gorge Reservoir. The cancellation comes after a 61-year-old man fell through the ice while fishing Monday. His body was recovered Tuesday.

Warm weather is forecast for the coming days, so officials said they expect the ice to continue to recede before the end of the weekend. Refunds will be distributed to tournament participants who pre-registered, according to the Flaming Gorge Chamber.

“It’s becoming too unpredictable and we don’t want anybody to get hurt,” said Daggett County economic director Brian Raymond. “With this being a nighttime tournament — and people tend to move around if they aren’t catching anything — and the conditions being the way they are, that just seems to be asking for trouble.”

About 220 people had signed up for the Burbot Bash as of Tuesday night, according to Raymond. He said many people wait until the event starts to sign up, so total participants for previous years have ranged from 400 to 1,100 depending on weather. The Flaming Gorge Chamber expects to resume the tournament in 2016. It was first held in 2011. 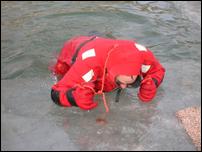 What you should know before you venture onto the ice

If you want to continue your outdoor activities during the winter, here are some tips to help you stay safe while on the ice.

Canceling the tournament will likely impact the local economy, but event coordinators said they would rather play it safe. While some areas still have 8 to 10 inches of ice, it could be problematic if large numbers of people congregated in the same area, according to Raymond.

“What is happening is that sometimes during the day the ice is coming off of the shore and then it will reform at night, and then it’ll come off again during the day so it’s continually weakening. It’s kind of sketchy,” he said.

Officials said ice should always be considered to be dangerous, and that people should get off the ice whenever it is warm or windy. More safety tips can be found online.