The many flavors of tailgating

Editor's note: The following is one article in a series of tailgating articles that will be posting weekly throughout the football season.SALT LAKE CITY — In last week’s column, “How to succeed at ‘Tailgating 101,’” we discussed the basics of tailgating and how you, too, could join the legions of tailgaters spreading good cheer and good food across the country. In this week’s edition, we’ll talk about the different types of tailgates and what to look for as you explore the tailgate lot nearest you.

From the dawn of time, or, more accurately, since the Princeton vs. Rutgers inaugural intercollegiate football game of 1869, the Garden of Eden from which all future sporting tailgates evolved, tailgates have fallen into several categories based on their areas of focus — The Foodies, The Big Rigs, The Homebodies, The Sophisticants and The Bacchanal. There are plenty of tailgates that start in one category but evolve into another, or manage to build a hybrid approach combining the best (or worst) traits of more than one, but these definitions capture most setups you’ll run across.

Sticking with the old adage Keep It Simple, Slick, this group of tailgaters keeps to the basic building blocks of tailgating — the back of a parked car and some food. They may even add a grill and a tent but eschew the kind of pomp and flash other tailgating groups integrate into the experience. Always friendly and willing to give a stranger a hot dog, sadly, they probably only brought enough buns for their family.

We at the Utah Pig Bus see ourselves squarely in this camp. Sure, we have a school bus, but the focus of our tailgates has always been the food! About the time we’d set our minds to tailgating, a co-worker sent us a link to a news article about a little company in Miami making a traditional Cuban pig-roasting box, La Caja China. We called, spoke directly to the owner and ordered the first pig box (as we affectionately call it) they’d shipped to the Western U.S. We had our muse and we’ve focused on porky goodness ever since. Most Foodie tailgates have a similar story and start every season with a menu built around the times and teams they’ll play. Foodie tailgates are some of the most welcoming and friendly you’ll find. 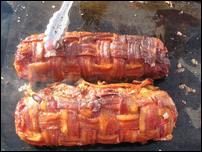 How to succeed at 'Tailgating 101'

After 12 years of tailgating, there are definitely moments where we wonder how we managed to find ourselves engaged in a particular activity. In this case, it's carving up a 13-pound beef round, wrapping the pieces in a nicely woven mesh of bacon, and submerging them in a soy-Worchester marinade where they'll rest for the next 24 hours.

In some tailgate lots you’ll think you’ve stumbled into some kind of recreational-vehicle arms race: giant motor homes that will never really motor farther from home than the distance to campus; TVs bigger than you have in your home mounted to the side of a trailer that also happens to have a grill attached; ... is that a helipad? A whole industry has sprung up around building these feats of tailgate engineering, but that seems to miss the whole point of the hobby. Many Big Rigs are happy to show you the many amazing features and functionality of their mobile mansions, but you may have to look elsewhere if it’s food and camaraderie you’re seeking.

These folks certainly haven’t lost sight of the friends-and-family focus of tailgating. In fact, they’ve done their very best to transport the comfort of their own living rooms right there into the middle of the tailgate lot. Seriously, they have rugs and carpet and La-Z-Boys.… And though they can be a bit slow to warm to strangers, once they welcome you in, you are part of the family! Pull up a TV tray and grab some of Aunt Ethel’s potato salad.

These folks are pretty much the opposite of the Homebodies. Just look for checked tablecloths and catering staff wearing team-branded chef coats. You may not be able to get beyond the velvet rope to participate, but if you do, the food is usually spectacular, even if the conversation is anything but. These folks have abandoned the community nature of tailgating in exchange for opulence and are often the least welcoming to visiting fans and their neighbors.

Yes, finally, the folks who are responsible for most of the reputation tailgating has today. You’ll often see drinking devices like the shot-ski and ice-luge that look more at home in a modern art display than a tailgate. These folks fully embrace the party nature of tailgating and, at times, can get a bit out of hand. But they’re also among the most welcoming and jovial of tailgaters. It may be the alcohol breaking down the social barriers, but the Bacchanal most often pride themselves on showing their visitors a good time.

So that’s what to look for in a tailgate. We’re already looking forward to the emails and texts we’ll get saying, “Oh, I’ve been to a Bacchanal at your tailgate” and “You’ve really turned into Sophisticants since you started writing this column.” But if our article helps new tailgaters feel more comfortable joining us on game day then our mission’s accomplished!

We got a lot of questions about the pictures of our Bacon Explosions that accompanied last week’s article. “Is this a real thing?” they said. “Have you gone too far?” they said. “Are you evil geniuses?” they said. And while the answer to all of these questions is “Yes,” since our Breakfast Bacon Explosion is on the menu this week, we thought we’d elaborate on how they’re made.

Here’s what you’ll need to make the breakfast version of our signature dish (this makes one; we usually make at least four):

Brown hash browns and cook half a pound of the bacon until crispy (make sure you reserve 12-14 pieces of bacon for the next step) and set aside. Now comes the fun part! On a flat surface using a standard over-under pattern, weave the bacon into a roughly 12-inch-by-12-inch square. Then, smooth out a roughly half-inch-thick layer of the sausage and repeat the process with the cooked hash browns. Sprinkle with a healthy dose of cheese and the crumbled pieces of cooked bacon.

Now comes the hardest part. Carefully roll the flat sheet of protein you’ve created into a log shape so that the edges just overlap and hold everything in. Gently transfer your meat logs to your smoker, seam-side down, and smoke at roughly 250 degrees for roughly four hours (Hey, it’s an art, not a science!). Remove from smoker, slice into half-inch rounds and enjoy (we also sometimes put gravy on them…) Voila! Bacon Explosion!

And if you don’t want to go through all that trouble, weirdly enough, there’s a place on the Internet where you can actually buy a Bacon Explosion already rolled and smoked.

Welby Evangelista and Ryan Lufkin are the founders of The Utah Pig Bus crew, one of the oldest and most celebrated tailgate crews at the University of Utah.