Friends rally for dog that survived winter alone in wilderness

SALT LAKE CITY — Everyone who knows Hogan calls her a survivor.

The dog became famous after it survived five or six months — or more — alone in the wilderness by drinking water from melted snow near a railroad tunnel called Hogan near Wells, Nevada, in 2008. It even chewed off a paw to escape a snare, according to veterinarians.

When chronic bronchitis — a result of being exposed to cold for so long — recently caused the dog to develop pneumonia, friends came together to support the owners as they tried to cover costs. Hogan spent five days in the ER at the Utah Veterinary Hospital before coming home, racking up nearly $5,000 in bills.

“She’s home now and on a slew of medications,” said owner Ken Van Moorhem. “They are saying it will be a full recovery, at least back to what is normal for Hogan. She has a lot of medical issues and injuries from the desert.”

Van Moorhem is a train conductor and occasionally saw the dog on his route. After seeing the dog multiple times by the tracks, he took pity on it and took her home. He named the dog after the tunnel where he spotted her and found her treatment for injuries sustained during her time alone. Van Moorhem was later recognized by PETA for his actions. 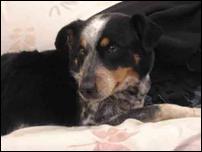 An injured dog managed to endure months alone in the bitter cold. The man who rescued her is being recognized by PETA--People for the Ethical Treatment of Animals.

Since being rescued, Hogan has touched the lives of others. A prosthetic foot was made as a replacement for her paw at Shriners Hospital, and afterward her owners brought her back to the hospital as a service dog. Hogan visited with patients for two years before retiring.

“It’s an orthopedic hospital, so (patients) liked seeing the prosthetic and some of them would take it off and look at her stump. A lot of them were just about to get one themselves,” he said. “Some of the kids got a big kick out of that.”

Other people might remember Hogan from her frequent trips to the farmer’s market, Van Moorhem said. Now 12 years old, Hogan is a calm and happy dog who loves walks, eating popcorn and cheese nibs, and having her chest rubbed for hours, if she has her way, he said.

A fundraiser* to cover the dog’s medical costs is being held on Go Fund Me.