SALT LAKE CITY — Division of Wildlife officials have good news for hunters with tags this fall: In almost every region of the state, the number of bucks are either similar to or better than the 2013 hunt.

Utah’s general archery hunt begins Aug. 16, the general muzzleloader hunt for bucks begins Sept. 24 and the general rifle hunt begins Oct. 18. DWR officials said the numbers of bucks are different in each unit, with water levels playing a large factor. Here is what deer hunters can expect across Utah for the 2014 fall hunt.

Unit 7 near Kamas has a lot of public land and offers a much higher buck-to-doe ratio than last year, with 22 bucks per 100 does, according to a DWR news release.

Unit 18 near the Oquirrh-Stansbury area had similar numbers with 20 bucks per 100 does in the herds. Officials reported that during the 2013 hunt, 50 percent of the general rifle deer hunters in Unit 18 took a buck.

Unit 16A near the Central Mountains-Nebo area has 21 bucks per 100 does and had a 37 percent reported success rate from rifle hunters in 2013. DWR regional wildlife manager Covy Jones said in a news release that the area is very dry this year, and he recommended hunting near water sources.

However, Jones said Unit 16B and 16C near the Manti-San Rafael area has received a lot of water this year, and deer will likely be spread over a large area. These units both had ratios of 19 bucks per 100 does. 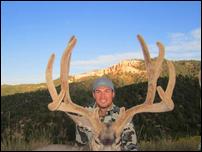 Photos: 7 of the highest scoring Utah mule deer killed by bow since 2010

Utah is known for having world class skiing, being the home of the Sundance Film Festival and for housing multiple national parks. However, many people may not realize that Utah also produces some giant mule deer.

Unit 17A along the west region of the Wasatch Mountains was named the “gem of north-central Utah this year” for hunting, according to DWR officials. The unit received a lot of rain, and Jones said the deer herds are doing extremely well.

“I’ve talked with hunters who have hunted this unit for decades,” Jones said in a news release. “Many of them report seeing more small four-point deer this summer than they’ve seen in more than 20 years.”

Officials said Unit 9B near the South Slope Bonanza-Vernal area had 13 bucks per 100 does. Rifle hunters had a 62 percent success rate on the unit during the 2013 hunt, and archery hunters had a 31 percent success rate, according to a DWR news release. Unit 9B is mostly desert area that doesn’t hold many deer, but officials said hunters can occasionally find a nice buck because of the low hunter pressure.

Numbers of buck-to-doe ratios for each unit:

Unit 11 near the Nine Mile area has a relatively low number of deer on the unit, but a high buck-to-doe ratio with 20 buck per 100 does.

“This unit doesn’t get hunted hard,” DWR regional assistant wildlife manager Randall Thacker said in a news release. “So if you find a buck, it might be a big, mature deer.”

Thacker gave advice for hunters for the 2014 season and said scouting before the season is extremely important.

“Little seeps and wet springs don’t show up on maps,” he said. “But, they draw deer like a magnet. The best way to find these seeps and springs is to scout the area before the hunt starts.”

Thacker also said hunters should focus on scouting a specific area and then hunt that same area each year to have better success.

“If you’re new to deer hunting, pick a canyon or two that look promising, and then focus on that area,” he said. “Learn the spots the deer use and the travel routes they take. You’ll find more success learning an area thoroughly than you will jumping to a new area every year.”

For a full list of the buck-to-deer ratio for each unit across the state, visit the DWR website.