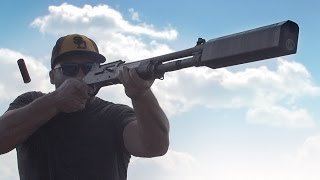 SilencerCo. vice president of marketing Mike Aland said his company didn’t invent the shotgun suppressor, but it is inventing a viable way to mass produce the silencer and make it available to the general public.

Aland said being able to create a commercially viable shotgun suppressor was a challenge that his company was excited to overcome.

“Nobody has ever been able to figure out a shotgun suppressor that can be mass produced,” he said. “It’s a huge challenge. Just even creating an effective shotgun suppressor is wildly challenging. Being able to achieve that is a difficult task in-and-of- itself, so that’s why very few people have even tried it. And then to be able to do it in a fashion where it’s consistent and able to produce on a large scale, that’s a whole other can of worms.”

Aland said while many people are wary of silencers and often let Hollywood images of assassins influence their ideas about suppressors, the shotgun silencer will actually be very beneficial for hunting and recreational shooting.

“Being able to bring that into hearing-safe levels will be extremely advantageous not only in a recreational sense, but in hunting,” he said. “To be able to not only protect your hearing, but also the hearing of your friends, also your animals — horses, dogs, etc. — to be able to hunt, there’s a huge upside to it from a health and safety perspective.”

SilencerCo. has currently produced a suppressor for only a 12-gauge shotgun, but Aland said they are looking to expand the line in 2015 to .410, 28 and 20-gauge shotguns.

“A quiet shotgun is a fun shotgun,” Aland said. “Guns don’t have to be loud.”

The suppressors will be available to limited retailers, including Gallenson’s Gun Shop, during the fourth quarter of the year, and will be made available to the general public in January.