MURRAY — A man found his stolen trailer after weeks of searching.

Scott Francom offered a $1,000 reward for the return of the trailer he renovated with his girlfriend when it was stolen Memorial Day. After posting an ad on KSL.com about the stolen trailer, he said he got calls and texts from people from all over the state who wanted to help.

“A lot of people were messaging me and emailing me saying they were keeping their eye out, which is totally awesome and kind of just goes to show that where we live is super cool,” he said. “That was something I really appreciated.”

Francom posted a surveillance photo of the truck he believed was used to steal his trailer online and a few days later people messaged him saying they thought they saw the truck in news coverage of a police chase. Anthony M. Archuletta, 48, led police on a chase and rammed two officers' cars after being caught burglarizing a home in Millcreek on June 7, according to investigators.

After looking into the story, Francom said he contacted the Unified Police Department and was told the license plate for his trailer had been found in Archuletta’s truck after he was arrested. Unified police detective Ken Hansen confirmed Francom’s license plate was found in the truck, along with numerous other items that appeared to have been stolen.

Francom then followed a series of tips that led him to a Kmart parking lot. He said he spoke to the manager and was told a trailer had been towed. When he visited the towing company, he found his trailer had been sitting out back for about 20 days. 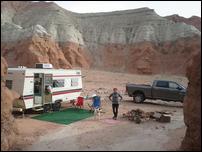 Renovating an old hunting trailer was a labor of love for a Utah couple.

“There is no way I ever would have been able to find it without a few people’s tips,” he said.

The VIN of the trailer had been scratched off, so Francom said when the towing company called police to do an inspection, investigators didn’t know it was stolen and the trailer was later assigned a new VIN. The people who stole the trailer had also painted the stripes, front window cover and a wheel fender black to disguise the trailer, he said.

There was trash, fast food wrappers and beer bottles inside of the trailer when Francom found the trailer, he said. Some dishes and other items appear to be missing.

However, Francom hopes to have it ready for the road again soon.

“I’ll make some room and pull it into my shop and get to painting it and cleaning and fixing it back up the way it was,” he said.

Francom said he wanted to thank all of the people who helped him find the trailer and that he was able to make some good friends through the journey.