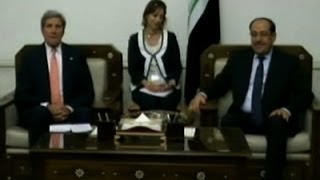 But he stressed military action would not be in support of the present Shiite-led government of Prime Minister Nouri al-Maliki.

Kerry, on a few hours' visit to Baghdad, urged Iraq's leaders to quickly set aside divisions as the only means of stopping the vicious Sunni insurgency and said Iraq's future depended on choices Iraq's leaders make in the next days and weeks.

"The future of Iraq depends primarily on the ability of Iraq's leaders to come together and take a stand united against ISIL," Kerry told a news conference, using the acronym for the al-Qaida-breakaway group, the Islamic State of Iraq and the Levant, that has captured huge swathes of Iraqi territory in the north and west.

"Not next week, not next month, but now," he said. "It is essential that Iraq's leaders form a genuinely inclusive government as rapidly as possible."

It was a dire warning to leaders of Iraq's bitterly divided Shiite, Sunni and Kurdish communities that came at a time when the Middle Eastern nation was facing its worst crisis since the withdrawal of U.S. forces in late 2011 after eight years in Iraq.

The Sunni fighters have virtually erased Iraq's western border with Syria and also taken territory on the frontier with Jordan.

Noting the dangers the Sunni militants pose to Iraq and the region, Kerry said the U.S. was prepared to take military action if necessary even before a new government is formed.

"That's why, again, I reiterate, the president will not be hampered if he deems it necessary, if the formation is not complete," he said, referring to Iraqi efforts to form a government that bridges the deep divisions among the majority Shiites and minority Sunnis, Kurds and other groups.

Kerry stressed, however, that if military action is taken - President Barack Obama has said he is considering airstrikes - "it has nothing to do with support for a specific government."

"It's not specifically support for the existing prime minister or for one sect or another," Kerry said. "It will be against ISIL, because ISIL is a terrorist organization, and I think everybody today that we talked to understood the urgency."

Kerry arrived in Baghdad just a day after the Sunni militants captured two key border posts, one along the frontier with Jordan and the other with Syria, deepening al-Maliki's predicament. Their latest victories considerably expanded territory under their control just two weeks after the group started swallowing up chunks of northern Iraq, heightening pressure on al-Maliki to step aside.

Their offensive in the north and west takes the group closer to its dream of carving out an Islamic state straddling both Syria and Iraq. Controlling the borders with Syria will help it supply fellow fighters there with weaponry looted from Iraqi warehouses, boosting its ability to battle beleaguered Syrian government forces.

The creation of such a vast safe haven would serve as a magnet for jihadis from across the world, much like al-Qaida did in the 1990s in Taliban-ruled Afghanistan. Already, the Islamic State's battlefield successes in Syria and more recently in Iraq have sent tremors across the region, jolting neighboring countries into action over fears that the Sunni militants may set their sights on them next.

In Jordan, Iraq's neighbor to the west, the army dispatched reinforcements to its border with Iraq last week to boost security, while in Lebanon police busted a suspected sleeper cell allegedly linked to the Islamic State militants in raids on two hotels in central Beirut.

Kerry offered few details of his closed-door meetings in Baghdad. But he said each of the officials he met with - including al-Maliki - committed to the newly elected parliament holding its inaugural session by the end of June.

Iraq's constitution says parliament must convene by June 30, when lawmakers must elect a speaker, a position that has traditionally gone to a Sunni. The chamber will then have 30 days to elect a president - traditionally a Kurd - who will have 15 days to ask the leader of the majority in the 328-seat legislature to form a government. Then a prime minister will be picked.

Al-Maliki's coalition, State of the law, won 92 seats in the April 30 election, the most by any single group. While that would have normally placed him in a strong position to lead a coalition government, there is a growing consensus among his former Shiite, Kurdish and Sunni allies to deny him a third term because of what they see as his monopoly on decision-making, his perceived sectarian policies toward the Sunnis and Kurds, and the military setbacks of the past two weeks.

Kerry, echoing comments made by Obama last week, said no country - including the U.S. - should try to pick new leadership for Iraq. "That is up to the people of Iraq," he said. However, Iraqi officials briefed on the Kerry-al-Maliki talks say the pressure has increased on the prime minister to step down.

Al-Maliki, they said, urged the United States during his talks with Kerry to start airstrikes against the Sunni militants in territory under their control in the mostly Sunni north and west. Kerry's response was that the United States needed to move with extreme caution to avoid civilian casualties and not appear to be targeting Sunnis, they said.

Also during the meeting, according to the officials, the United States appeared to be linking any military action on guarantees that a genuinely inclusive government would come to office in Baghdad.

The officials agreed to discuss the substance of the talks only on condition of anonymity.

Obama, in a round of television interviews in the U.S., said al-Maliki and the Iraqi leadership face a test as to whether "they are able to set aside their suspicions, their sectarian preferences for the good of the whole."

"The one thing I do know is that if they fail to do that then no amount of military action by the United States can hold that country together," Obama said.

Al-Maliki's Shiite-led government long has faced criticism of discriminating against Iraq's Sunni and Kurdish populations. But it is his perceived marginalization of the once-dominant Sunnis that sparked violence reminiscent of Iraq's darkest years of sectarian warfare in 2006 and 2007.

In the latest evidence of the deadly turmoil roiling Iraq, suspected Sunni militants stormed the house of a government-backed Sunni militiaman, his wife, son, daughter, sister and a cousin in Tarmiyah, a town 50 kilometers (30 miles) north of Baghdad, police and hospital officials said. The anti-al-Qaida militia, known as "Sahwa" or "Awakening," was set up by the Americans to fight al-Qaida in 2007.

The Iraqi government later took over the militias, incorporating many of them in the security forces. They have been revived to combat the re-emergence of the Sunni militants over the past year.

© 2014 The Associated Press. All rights reserved. This material may not be published, broadcast, rewritten or redistributed. Learn more about our Privacy Policy and Terms of Use.