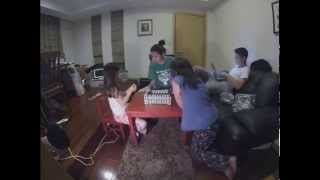 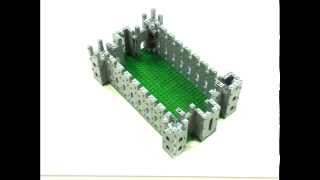 SHANGHAI, China — A Utah family started a building brick company designed to create LDS temples in an effort to teach their children about the buildings.

Suzanne and Tim Calton met in Provo after they both served Mandarin- speaking missions for The Church of Jesus Christ of Latter-day Saints. They were later married and have lived in Shanghai, China, for the past six years on an overseas work assignment.

Suzanne said she got the idea for the building block company, Brick'em Young, because she realized that her children had very little exposure to LDS temples in Shanghai. She said she and her husband wanted their children to learn about the buildings associated with their faith.

"We had to get creative in teaching our children about how essential the temple was, though they would only see a temple a couple of times a year when we traveled," she said. "We started out with a small goal, to connect our own kids to the temple and the pioneers that built them, stone by stone. We wanted our kids to appreciate the sacrifice that went into the building process. What started out as a teaching challenge turned into a beautiful journey of connecting our children to our pioneer heritage."

Suzanne said her children began drawing pictures of temples at home and school. Her oldest son, Hunter, was fascinated with plastic building bricks and he began constructing his own variations for the temple.

"The thought that our kids could be so connected to the temple from the other side of the world, in a land without temples, was surprising, and we wanted to keep going with it and facilitate this appreciation for temples at this impressionable age," Suzanne said.

Brick'em Young currently only offers the Salt Lake Temple set, which has 1,725 pieces and takes four to six hours to complete building. The building-block temple is 12 inches tall at the center spire and is around 12 inches long and 6 inches wide.

Suzanne said the response to their start-up company has been amazing. They have requests for other temple models, and the Nauvoo Temple kit is set to be released in October. She said people can also vote for the next temple model.

"We simply wanted to create something for our friends and family," Suzanne said. "We never thought that anyone else would have as much fun with this as we have! Just the thought of somebody's home with a temple model in it that they constructed together with their family makes it all worth it!"

The kits allow children as young as 9 to put the set together independently without adult supervision, but the recommended age is 12 years or older. Suzanne said that each building kit also comes with a list of frequently asked questions for each particular temple and a few facts about the building process of that temple.

However, Brick'em Young is not the first time someone has attempted to build an LDS temple out of building blocks. A member of the National Guard recently made headlines after he built a model of the Salt Lake Temple from 35,000 Lego bricks.