You won't stop thinking about 'The Signal' for days 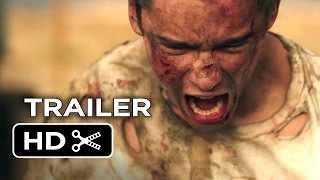 SALT LAKE CITY — The big release this weekend is the animated sequel “How to Train Your Dragon 2,” but the small Sundance film “The Signal” also made its way into theaters this June.

“The Signal” debuted at Sundance 2014 and is a sci-fi movie that tries to toy with your mind more than serve up eye candy. While that sounds like a welcome change, the twisting plot and keep-you-in-the-dark plot don’t always land like the filmmakers hoped.

The less you know about “The Signal” going in, the better, so I’ll be brief with my description.

Three friends are traveling cross country and end up in a top-secret facility where the friends are told they’ve come in contact with an alien being.

The slow-burn plot keeps you guessing and trying to figure out what’s going on just as much as our characters.

The movie is minimalist sci-fi and there are elements that are truly creepy and others that are enthralling. The film will keep you fixated on the screen for the entire 94-minute run time, mainly because you just really want to know what’s going on. Unlike many films like “The Signal,” this one actually gives you some closure and answers, although there are several plot holes along the way.

Overall “The Signal” has its issues, but you’ll be tickled by the action sequences and their originality. The film was made on a small budget and instead of selling out to cheap CGI effects or skipping the action all together the director, William Eubank, gets really creative and it truly pays off.

Lead Brenton Thwaites is another bright spot of the film. The young Aussie is working non-stop these days and his performance in “The Signal” should show you why he’s suddenly in such high demand.

I’ve spent days trying to decide if I should recommend “The Signal” and what I’ve realized is despite its problems I can’t stop thinking about the film. I just can’t seem to get it out of my mind.

“The Signal” is not for everyone, but if you are curious about the film and enjoy a slow-burn movie then give “The Signal” a chance and see what you think for yourself.

“The Signal” is rated PG-13 and has a 13+ age rating on OK.com. There’s no sex or nudity, but there is some language and a fair amount of violence and disturbing images.