Army: Bergdahl 'looked good' after returning to US

5PM: Army: Bergdahl 'looked good' after returning to US 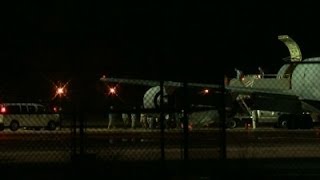 Raw: Bergdahl Back in US to Continue Recovery

SAN ANTONIO (AP) — In the moments after Army Sgt. Bowe Bergdahl arrived back in the United States following five years of captivity by the Taliban in Afghanistan, he was nervous but "looked good" and saluted a commanding officer who welcomed him home, military officials said Friday.

Bergdahl is working daily with health professionals to regain a sense of normalcy and move forward with his life, officials added.

Bergdahl's family has not joined him since he arrived at Brooke Army Medical Center at Fort Sam Houston in Texas early Friday morning, and Army officials would not say when relatives might show up.

In a statement read at a news conference Friday, Bergdahl's parents said they "are overjoyed that their son has returned to the United States" but asked for privacy.

Maj. Gen. Joseph P. DiSalvo, who greeted Bergdahl upon his arrival from an Army medical facility in Germany, said he exchanged a few words with Bergdahl after a three-vehicle convoy met him.

"He appeared just like any sergeant would when they see a two-star general, a little bit nervous. But he looked good and saluted and had good deportment," DiSalvo said at the news conference, adding that Bergdahl was in stable condition.

Officials said there is no timeline for the final step in Bergdahl's reintegration process.

"We will proceed at his pace," said Col. Bradley Poppen, an Army psychologist.

As far as Bergdahl's interaction with relatives, Poppen said a soldier typically determines when to reunite with his or her family. Poppen declined to release further details, citing the family's request for privacy. After the news conference, officials said they did not know if Bergdahl has spoken with his family.

Military officials declined to give details on what Bergdahl might remember about his capture or what he knows about the public uproar surrounding his capture and release.

In the short time he has been back on U.S. soil, Bergdahl, who can walk on his own, has been on a bland diet and has shown a fondness for peanut butter, officials said.

While at Brooke Army Medical Center, Bergdahl will have a "standard patient room" but will not have access to a television, said Col. Ronald Wool, who is in charge of Bergdahl's medical care.

"We will bring him up slowly to what has been transpiring over the last five years," Wool said.

Bergdahl arrived speaking English, though officials indicated his speech had been impacted from being in captivity for so long.

"Overall our assessment is that he did not have the opportunity the past five years to practice and speak his English," said Wool.

Poppen said that during his captivity, Bergdahl had no control over any aspect of his life, including what and when he could eat. "So one of the concepts is to get him a sense of predictability and control of his environment," he said.

Army officials briefed the media at a golf course near Fort Sam Houston and said no reporters would be allowed onto the base or in the hospital. Officials have kept a lid on details of Bergdahl's condition out of concern that he not be rushed back into the public spotlight.

The Idaho native was captured in Afghanistan in June 2009 and released by the Taliban on May 31 in a deal struck by the Obama administration in which five senior Taliban officials were released from detention at Guantanamo Bay, Cuba.

Bergdahl had been at Landstuhl Regional Medical Center in Germany since June 1.

The Army has not formally begun a new review into the circumstances of Bergdahl's capture and whether he walked away without leave or was deserting the Army when he was found and taken by insurgents.

The answers to those questions will be key to whether Bergdahl will receive more than $300,000 in back pay owed to him since he disappeared. If he was determined to have been a prisoner of war, he also could receive roughly another $300,000 or more.

Before his departure from Germany on Thursday, officials in Washington said Bergdahl would not receive the automatic Army promotion that would have taken effect this month if he were still in captivity. Now that he is back in U.S. military control, any promotions would depend on his performance and achievement of certain training and education milestones.

Many have criticized the Obama administration for agreeing to release five Taliban prisoners in exchange for Bergdahl. Some of Bergdahl's former Army colleagues have accused him of deserting his post.