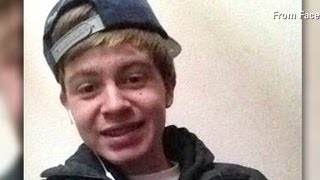 TROUTDALE, Ore. (AP) — A 15-year-old boy accused of killing a fellow freshman in a high school locker room was heavily armed with an assault rifle, handgun and knife that police said Wednesday had been taken from a secured area at his family home.

The details were released as police provided a more detailed account of the violence on Tuesday at Reynolds High School in Troutdale, and a portrait emerged of 15-year-old suspect Jared Michael Padgett as a devout Mormon and aspiring serviceman.

Authorities said an autopsy confirmed that Padgett had died in a school bathroom of a self-inflicted gunshot wound after a brief exchange of gunfire with arriving officers.

However, no link has been discovered between Padgett and 14-year-old victim Emilio Hoffman, leaving police unsure if the shooter was targeting someone in particular or had launched a random attack.

Padgett had a conflicting image among other students.

"He always talked about guns and sometimes got mad," student Kaylah Ensign said, adding that he could also be kind and respectful.

"He helped kids and I never would have thought he would do that," Ensign recalled. "And he was really neat."

Freshman Daniel DeLong, 15, said he would see Padgett in the school halls but did not have any classes with him.

"Honestly he looked like a really nice kid, like somebody you'd want to have on your side," DeLong said. "I never would have thought this would have happened."

Earl Milliron, a friend of the Padgett family, said Jared planned a career in the military and was devoted to his Mormon faith after being ordained as a deacon at age 12.

"I never suspected that he had serious problems, I refuse in my mind to believe that Jared Michael who did the shooting is the same Jared Michael I knew," said Milliron, 86, who has known the Padgett family for more than 25 years and belongs to the same church ward.

Jared Padgett's oldest brother had served in the military in Afghanistan and Jared was planning the same path, he said. Jared was in the Junior Reserve Officers' Training Corps program and was proud to be seen in his uniform.

Jared's mother and father were no longer together, and the couple had six children, Milliron said.

"I saw Jared at church every Sunday," he said. "He was very quiet, I never saw him angry, he was extremely even-tempered, he was always at the best possible behavior."

Police Chief Scott Anderson said Padgett had taken the weapons used in the attack from his family home. "The weapons had been secured, but he defeated the security measures," the chief said.

Padgett took a school bus to campus before the shooting and carried a guitar case and duffel bag. Police declined, however, to say if the weapons had been concealed in the baggage.

Jose Garcia, another student on the bus, said someone asked Padgett what was in the guitar case and duffel bag, and Padgett said it was his football gear and a uniform stand, a rack used for keeping uniforms crisp, The Oregonian reported.

"He wouldn't say anything else," Garcia, 15, told the newspaper.

At school, the shooter went to a gymnasium that was detached from the main building and shot Hoffman in a locker room. He also wounded physical education teacher Todd Rispler, who managed to make his way to an office and warn administrators about the shooting. A lockdown was ordered and authorities were alerted.

As the gunman moved through a hallway, he encountered officers as they entered from two separate doors. The shooter ducked into a small restroom, police said.

"We know there was an exchange of gunfire between one of the two responding officers and the shooter," Anderson said.

Padgett was later found dead in the bathroom.

Anderson praised Rispler and the officers.

"I cannot emphasize enough the role that Mr. Rispler and the responding officers played in saving many, many lives yesterday," he said.

Jennifer Hoffman, the mother of the victim, said he loved his friends and sports, especially soccer. He had a sister and three brothers, along with a number of foster siblings he had grown up with.

She says he enjoyed science and history, but soccer was his whole life.