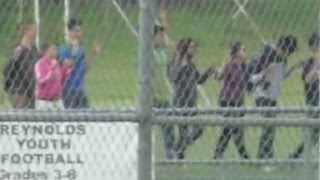 TROUTDALE, Ore. (AP) — A teen gunman armed with a rifle shot and killed a 14-year-old student Tuesday and injured a teacher before he likely killed himself at a high school in a quiet Columbia River town in Oregon, authorities said.

After the shooting stopped, police spotted the suspect slumped on a toilet in a bathroom at Reynolds High School. Officers used a robot with a camera to investigate and discovered the suspect was dead and that he had likely killed himself, Troutdale police spokesman Sgt. Carey Kaer said.

His victim was identified as freshman Emilio Hoffman, who was "loved by all," police Chief Scott Anderson said at a Tuesday news conference. He said Hoffman was found in the boys' locker room.

A girl who used to be Hoffman's girlfriend said he was "a good kid" and a "down-to-earth guy."

"He was very caring, he loved to joke around," said Savannah Venegas, 16.

Hoffman lived with his mother and had an older brother and two younger sisters, both in elementary school, Venegas said.

Anderson said he spoke with Hoffman's family, saying they had a difficult road ahead and sought privacy.

"They wouldn't have just picked him," she said. "It had to be, just, random."

Authorities have tentatively identified the gunman but his name is being withheld until his family is notified, Anderson said.

The teacher, Todd Rispler, had injuries that weren't life-threatening, and he was treated at the scene. Rispler, a 50-year-old physical education instructor and former track coach, went to the office and initiated the school lockdown, Anderson said. The attack panicked students and they were told to go quietly to their classrooms.

On Tuesday evening, teens on skateboards and others accompanied by their parents joined Oregon Gov. John Kitzhaber at a prayer vigil at a church about 5 miles from the shooting scene.

"I'm here for him, for Emilio," 15-year-old Jose Medel told The Oregonian. Medel is a freshman who said he played soccer for several years with Emilio Hoffman.

Earlier, freshman Morgan Rose, 15, recounted how she hunkered down during the attack in a locker room with another student and two teachers.

"It was scary in the moment. Now knowing everything's OK, I'm better," she said.

Freshman Daniel DeLong, 15, said after the shooting that he saw a physical education teacher at the school with a bloodied shirt. He said he was texting friends to make sure they were all OK.

Anderson said two on-campus police officers were the first to respond to reports of a shooting. The officers and a tactical team sent to the school "brought this to a conclusion," the chief said, without elaborating.

"Oregon hurts as we try to make sense of a senseless act of violence," the governor said in a statement.

The first reports of shots fired came around 8 a.m. on the next-to-last-day of classes. Police initially seemed uncertain about whether there was a live shooter in the school.

Students were eventually led from the school with hands up or on their heads. Parents and students were reunited in a supermarket parking lot.

Mandy Johnson said her daughter called from a friend's phone.

"I thank God that she's safe," said Johnson, who has three younger children. "I don't want to send my kids to school anymore."

The Reynolds School District issued a statement mourning the loss of one of its students.

Reynolds is the second-largest high school in Oregon, with about 2,800 students. The school is about 15 miles from Portland and its students come from several communities.

During the evacuation of the school, authorities found another student with a gun and he was taken into custody. That weapon and arrest were not related to the shooting, Anderson said.

The Oregon violence came less than a week after a gunman opened fire on a college campus in neighboring Washington state, killing a 19-year-old man and wounding two others. It follows a string of mass shootings that have disturbed the nation, including one on Sunday in Nevada that left two Las Vegas police officers and a civilian dead.

The Tuesday shooting was the first fatal school shooting in Oregon since May 1998 when 15-year-old Kip Kinkel killed two students and wounded 25 others at Thurston High School in Springfield near Eugene. He killed his parents prior to the attack and is serving a 111-year prison sentence.

AP writers Gosia Wozniacka and Steven DuBois in Portland and Alina Hartounian in Phoenix contributed to this report.